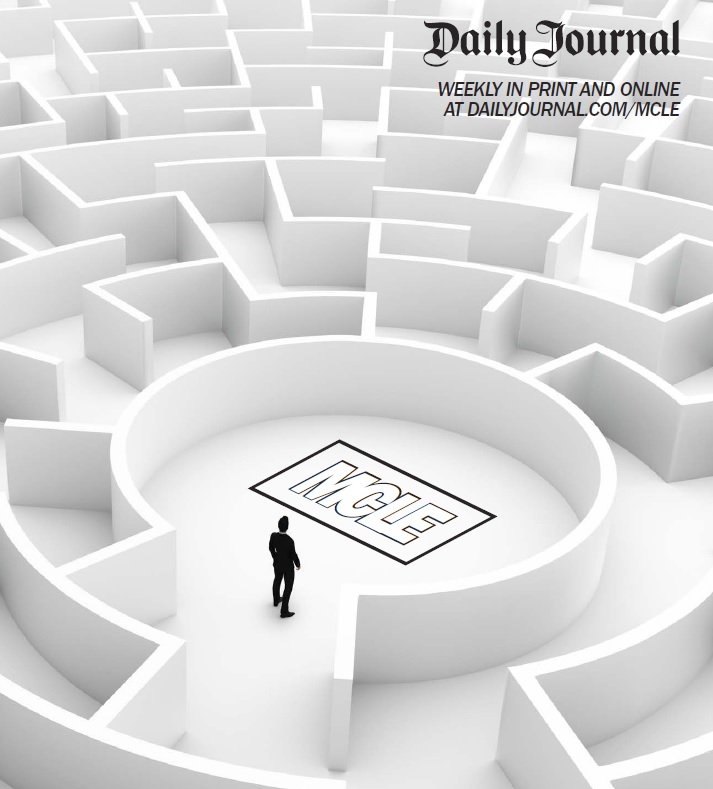 Does a defective conflict waiver invalidate an entire fee agreement, including an arbitration clause? Can a broad, non-specific conflict waiver suffice to provide informed written consent of a known conflict at the inception of the attorney-client relationship? Does a deficient conflict waiver disentitle a firm to fees? These and a number of other questions were answered by the California Supreme Court in Sheppard, Mullin, Richter & Hampton LLP v. J-M Manufacturing Co., Inc., 2018 DJDAR 8765 (Aug. 30, 2018). Also notable was the question that was not answered -- whether broad, non-specific advance waivers can in effect neutralize the duty of loyalty with respect to future conflicts. That issue was left for another day.

The Conflict at Issue

Sheppard Mullin's engagement agreement with J-M included the following broad conflict waiver: Sheppard Mullin "has many attorneys and multiple offices. We may currently or in the future represent one or more other clients ... in matters involving [J-M]. We undertake this engagement on the condition that we may represent another client in a matter in which we do not represent [J-M] ... provided the other matter is not substantially related to our representation of [J-M] and in the course of representing [J-M] we have not obtained confidential information of [J-M] material to representation of the client. By consenting to this arrangement, [J-M] is waiving our obligation of loyalty to it so long as we maintain confidentiality and adhere to the foregoing limitations." J-M was represented by in-house counsel while negotiating the engagement agreement, although the issue of the conflict waiver was not discussed.

Unbeknownst to J-M -- but known to Sheppard Mullin from the outset of its representation of J-M -- the firm had a long-term attorney-client relationship with one of the plaintiffs in the qui tam action, South Tahoe Public Utility District, pursuant to which Sheppard Mullin provided occasional labor and employment work. While the firm was not actively providing such services to South Tahoe when it started representing J-M, it had done so less than five months earlier and began actively working again on an employment matter for South Tahoe within weeks of starting work on the qui tam action. Sheppard Mullin did not disclose the conflict to either South Tahoe or J-M because it concluded that its conflict waiver -- contained in both clients' engagement agreements -- obviated any need to do so.

When South Tahoe discovered the conflict, it moved to disqualify Sheppard Mullin in the qui tam action. That motion was granted by the federal district court, which concluded that the waiver was "ineffective to indicate South Tahoe's informed consent to the conflict at issue here." J-M then refused to pay Sheppard Mullin's outstanding fees of more than $1 million out of more than $3 million billed.

The fee dispute was submitted to binding arbitration pursuant to the engagement agreement, resulting in an award in favor of Sheppard Mullin. The arbitrators found that, even assuming Sheppard Mullin's conflict waiver was insufficient, the ethical violation was not serious enough to justify disgorgement or forfeiture of fees. The trial court confirmed the award.

However, the Court of Appeal found that J-M's challenge to the enforceability of the engagement agreement as a whole based on the alleged conflict of interest had to be decided by the court, not the arbitrators. Sheppard, Mullin, Richter & Hampton LLP v. J-M Manufacturing Co., Inc., 244 Cal. App. 4th 590 (2016). The Court of Appeal proceeded to find that Sheppard Mullin had failed to provide J-M with sufficient disclosure to allow for informed written consent, as required by Rule of Professional Conduct 3-310(C), notwithstanding the conflict waiver, and that the engagement agreement was unenforceable. As a result, Sheppard Mullin was ordered to disgorge its fees. The Supreme Court granted review.

Effect of Inadequate Waiver on Arbitration

The Supreme Court first discussed whether the arbitration award could be invalidated if the engagement agreement violated the Rules of Professional Conduct. Under the California Arbitration Act, an arbitration award may be vacated when "the arbitrators exceeded their powers." Code of Civil Procedure Section 1286.2(a)(4). This exception applies when a court determines that the contract at issue is "illegal and against the public policy of the state." Loving & Evans v. Blick, 33 Cal. 2d 603 (1949). While not challenging this principle, Sheppard Mullin argued that it should apply only to public policy declared by the Legislature, and not, therefore to a violation of the Rules of Professional Conduct.

The Supreme Court rejected this argument, noting that the California State Bar is authorized by statute to formulate the Rules of Professional Conduct, which are then adopted and approved by the Supreme Court. Accordingly, an attorney contract that "has as its object conduct constituting a violation of the Rules of Professional Conduct is contrary to the public policy of this state and is therefore unenforceable." This includes an arbitration clause within such a contract. The court noted, however, that the violation of an ethical rule in one portion of a contract does not necessarily preclude enforcement of the contract as a whole; it is only when "the illegality taints the entire contract" that it is illegal and unenforceable.

The Supreme Court next turned to the question of whether the engagement agreement ran afoul of Rule of Professional Conduct 3-310(C)(3), which provides that an attorney "shall not, without the informed written consent of each client ... represent a client in a matter and at the same time in a separate matter accept as a client a person or entity whose interest in the first matter is adverse to the client in the first matter." "Informed written consent" requires disclosure "of the relevant circumstances and of the actual and reasonably foreseeable adverse consequences to the client." Rule of Prof. Conduct 3-310(A)(1).

The purpose of this rule is to enforce the attorney's duty of loyalty rather than the duty of confidentiality, since the conflict arises even though there is no relationship between the matters. Sheppard Mullin's broad conflict waiver applied to the representation of other clients, whether "currently or in the future," and essentially neutralized the duty of loyalty.

Given Sheppard Mullin's awareness of the conflict between J-M and South Tahoe at the inception of the relationship with J-M, the firm failed to disclose all of the "relevant circumstances." As the Supreme Court explained, "An attorney or law firm that knowingly withholds material information about a conflict has not earned the confidence and trust the rule is designed to protect." Accordingly, the conflict waiver was inadequate, since it only stated that a current conflict might exist, even though the firm knew that a current conflict actually existed.

Sheppard Mullin nonetheless argued that its blanket waiver was sufficient in light of J-M's sophistication and the participation of its general counsel in the engagement negotiations. In support of this position, Sheppard Mullin cited a comment to ABA Model Rule 1.7, which provides that a general waiver may be effective where the client "is an experienced user of the legal services involved," particularly if the client is represented by independent counsel.

The Supreme Court rejected this position, noting that California has not adopted the Model Rules. Even though California's Rules of Professional Conduct have been amended as of Nov. 1 to more closely parallel the Model Rules, differences remain, and the particular comment cited by Sheppard Mullin regarding sophistication was not adopted. In any event, where the conflict is known to the attorney at the time he seeks a waiver, it must be disclosed even if the client is sophisticated. "Whether the client is an individual or multinational corporation with a large law department, the duty of loyalty demands an attorney or law firm provide the client all material information in the attorney or firm's possession."

Finally, the Supreme Court turned to the question of whether Sheppard Mullin could still collect a fee notwithstanding its ethical violation. Sheppard Mullin argued that it should still be able recover the reasonable value of its services given that it acted in good faith reliance on the blanket waivers both clients had signed, and never breached the duty of confidentiality (as opposed to the duty of loyalty).

The court remanded the matter for further litigation in the trial court, concluding that "California law does not establish a bright-line rule barring all compensation for services performed subject to an improperly waived conflict of interest, no matter the circumstances surrounding the violation." Instead, the egregiousness of the attorney's conduct, its potential and actual effect on the attorney-client relationship, and the existence of alternative remedies must be considered. The trial court must then, in its discretion, fashion an equitable remedy "while preserving incentives to scrupulously adhere to the Rules of Professional Conduct."

While leaving much to the discretion of the trial court, the Supreme Court nonetheless made clear that simply multiplying the firm's hourly rate by the hours expended -- in essence awarding the firm its contractual fees -- would not suffice: "Although the law firm may be entitled to some compensation for its work, its ethical breach will ordinarily require it to relinquish some or all of the profits for which it negotiated."

The Supreme Court also left open the possibility that the trial court could still find that Sheppard Mullin's misconduct was egregious enough to preclude any award. Indeed, two of the justices, in dissent, opined that the record already demonstrated that Sheppard Mullin had forfeited any entitlement to fees. Sheppard Mullin may therefore consider itself fortunate that it will still have the chance to seek compensation for the 10,000 hours it spent on the qui tam action notwithstanding its inadequate conflict waiver. Given the guidance now provided by the Supreme Court with respect to broad, non-specific conflict waivers, future law firms that find themselves in a similar position might not be so lucky.