A UCLA law professor's academic interest in an obscure internet database leads to a criminal charge.

If only the forged court order hadn't been sent to Google, UCLA law professor Eugene Volokh never would have seen it, and Steve Farzam, chief operating officer of the Shore Hotel, would never have been charged with counterfeiting a Los Angeles County Superior Court seal.

But the story of how Volokh's academic interest in an obscure internet database led to a criminal charge against a well-known Santa Monica hotel executive begins with another article.

In July 2017, Atavist Magazine, a long-form journalism website, was preparing to publish a piece by David Mark Simpson about Steve Farzam. Farzam is a member of the prominent Farzam hotel family and a top executive at the luxury Shore Hotel -- a Santa Monica icon overlooking the Pacific Coast Highway.

It also included information from Farzam's 2015 criminal case, where he was charged with 77 counts and pleaded to unauthorized computer access, impersonation of an FBI agent, and possession of an assault rifle. He was ordered to serve 90 days in jail.

In July 2017, before the article was published, Atavist received a letter from Rachael Aguirre, general counsel for the Shore Hotel, stating the forthcoming article would likely be libelous and defamatory. Aguirre also noted a court order that sealed all documents related to Farzam's 2015 criminal case and wrote, "Any information ascertained from [the 2015 case], which is published or made public, is in direct violation of that Court's June 1, 2015 Court Order sealing all documents related to Mr. Farzam's criminal matter from public view."

Kissinger also wrote that the referenced court order did not exist: "Your letter also contains a misstatement. A review of the transcript from the June 1, 2015 hearing shows that there is no court order sealing all documents."

Simpson's article was published in July 2017. It was a sprawling personal history of Farzam that included eyewitness accounts and charging documents detailing decades of reckless behavior. It also had easily downloadable links to court documents, including those the purported 2015 court order sealed.

Six months after the article was published, in an email dated Jan. 26, 2018, Kissinger was sent a "formal demand" from Farzam's personal attorney, Isabel A. Ashorzadeh of Ash Legal Group. Ashorzadeh demanded the Atavist article be "immediately disabled." Ashorzadeh claimed she could prove "damages that exceed $574,900 as a direct and proximate cause of this publication ... which does not include damages to Shore Hotel." The email stated Aguirre was now representing the Shore Hotel as a separate plaintiff in the matter.

Ashorzadeh also wrote she had personal knowledge of the court order Kissinger claimed didn't exist: "Ms. Aguirre's letter to you in fact did not contain a misstatement regarding the courts order to seal documents related to the conviction in Los Angeles Superior Court Case No. BA425132. I would suggest you do not rely on a non-certified court transcript as you apparently have made an error. Upon personally inspecting the court's file last week, the order is absolutely clear, and your clients have violated it."

The whole matter would probably have died right then and there if not for UCLA School of Law professor Volokh's interest in the Lumen Database.

As part of his academic research into court forgeries, Volokh spends a prodigious amount of time combing through the Lumen Database. The database is a third-party service that archives requests to take down websites that Google and other prominent search engines receive -- whether or not those requests are acted upon.

"[It] shows me what's happening under the radar. What's happening not in the U.S. Supreme Court and not in any state or appellate court. And in the process, I find things that are clearly forgeries," Volokh said.

On Feb. 15, 2018, Volokh saw something relatively unique. It was a demand letter asking Google take down an online magazine article because, "This story cites specific court documents that were in fact sealed. This site shall be removed immediately from google search results."

Attached to the take-down request was a court order.

"I was trying to figure out why the court would seal it. So I looked it up," Volokh said.

When Volokh looked up the case number listed on the order, he could not find the sealing order. He sent emails to Ashorzadeh and Kissinger, neither of whom confirmed the existence of the order. Kissinger would not speak on the record because she did not have authorization from her client, and neither Ashorzadeh nor Aguirre could be reached for comment.

Volokh also sent a document retrieval service courier to the courthouse to check for a sealing order, which could not be located.

Lastly, Volokh spoke with the counsel listed on the alleged order, Michael A. Killackey, who had never heard of Steve Farzam.

At that point, Volokh faced a choice of what to do next.

"I think a lot of us when we see a crime taking place, we try to call the police or call the prosecutor's office," Volokh said, "and I feel they ought to know."

Volokh looked up Farzam, saw he was on probation, and decided to call the prosecutor in the case. "Whenever I call, I say: 'Look I have these documents. They seem to suggest there is something fishy, but this is just my supposition. I would love it if you have a look at it and see what's correct.'"

The investigation was eventually given to Los Angeles Police Det. Kenneth Bryant of the Major Crimes Division. Bryant checked the courtroom documented on the order, allegedly issued by Judge Elizabeth A. White, and discovered a glaringly obvious problem with the criminal court order.

Judge White sits in Department 48 of the Stanley Mosk Courthouse and handles only civil claims.

When he further investigated the Los Angeles County Superior Court seal stamped on the order, he was informed by court employees that this was not a common practice in Department 48.

It just so happened shortly after Volokh's tip, a former employee who was alleging sexual misconduct against Farzam in a civil suit filled out a witness intimidation form against Farzam.

According to the subsequent criminal complaint, the former employee, Lieber Hernandez, claimed to have received a harassing phone call from Farzam and to have found a website which had a URL that was roughly her name, and which had photographs of her and her family, along with a fictitious criminal background on it.

Also during this time, in May 2019, the California Coastal Commission slapped a record $15.5 million fine against Sunshine Enterprise, which is owned by the Farzam family, for replacing two of the only low-cost motels in Santa Monica in order to build the luxury Shore hotel, without a permit.

On Nov. 15, 2019, an arrest warrant was issued against Farzam on four criminal counts: one count of attempting to dissuade a witness, two for identity theft, and one for the crime of counterfeit seal. 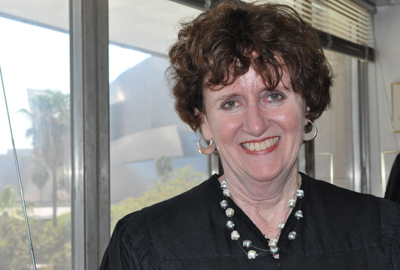