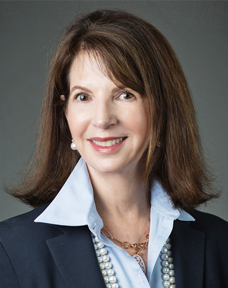 Deborah A. David, Esq. brings extensive experience to her ADR practice. A member of ABOTA, she joined JAMS in 2000 following a very successful 25-year litigation career representing defendants and plaintiffs in a broad area of tort and business matters. In late 2002, Ms. David moved to London, England where she continued her ADR practice mediating cases in Europe, Asia and Africa. In late 2016, she returned to live and work in Southern California.

Prepared, patient and persistent, she astutely identifies issues that might influence parties to look at their interest in settling. In arbitration, she rules on the basis of the facts and the law, carefully explaining her rationale in a written award that fully informs the parties of the reasons for the outcome.

She was appointed by the California Superior Court to mediate the Ford Explorer/ Firestone tire rollover cases. The Chief Justice appointed her to the Judicial Council Task Force on the Quality of Justice, which evaluated and drafted legislation to improve ADR in California.

Client feedback includes: "She brought to bear a natural authority"; "...absolutely dogged. She never says die. She is one of the leading lights"; "She gains the confidence of both sides"; "She has the hands-on trial experience that helps her understand how things might play at trial"; "Her experience, patience and expertise helped in tricky circumstances. She was just great to lead us up a steep mountain. Without her help, we had no chance of a resolution."

A: In my view, lack of the right to appeal does not render less reliable a thoroughly reasoned award. I consider carefully whether the admitted evidence and testimony are sufficient in terms of weight, reliability and credibility to prove the points for which they have been submitted. I then rule on the basis of the facts and the law, carefully explaining the result in a written award that fully informs the parties of the reasons for the outcome. The role of an arbitrator is to confront and decide tough issues--and to document that decision process. The arbitrator's role does not include "splitting the baby" or imposing compromise.

Q: What are the techniques you use when the parties have reached a seeming impasse?
-- Jennifer Keller, Keller Anderle LLP

A: Depending on the cause, these are some of the techniques I use:
• To avoid "group-think", I suggest meeting separately with the attorneys or parties.
• For unrealistic demands/offers, I seek agreement on the reasonable range (brackets) within which to continue negotiations.
• If fatigue is part of the problem, a short break or change of scenery can work wonders.
• Increased emphasis on realities and risks can help a party adjust expectations.
• Where private session discussions indicate a number to which the parties may agree (however reluctantly), I may suggest a mediator's proposal.
• Impasse can occur when parties have trouble transitioning from the dispute to its resolution. They may require more time to express concerns or interests. Settling parties are giving up their "day in court." They need to feel they have been heard.
• I once asked a party to imagine a day without the dispute in his life. That broke the impasse.

Q: What are the plusses and minuses of joint session presentations where each side lays out their case at the beginning of a mediation session? Do you typically employ the joint session approach or not and if so why?
-- Joe Tabacco at Berman Tabacco

A: In some situations, an initial joint session is not the best way forward; in others, it is. Depending on the emotional temperature, for instance, a joint session might not be an ideal start to the day. Generally, the value of joint session presentations depends on how they are done. An initial joint session in which the sides lay out their case by reverting to positions expressed in pleadings or briefs is rarely helpful, and it wastes time. In contrast, a well-prepared presentation that is persuasive rather than positional and signals both a willingness to listen and a sincere commitment to the mediation process can be very useful. In cases that involve an on-going relationship, I often suggest a joint session during the bargaining phase to settle the terms of an agreement. I never go into any joint session without making sure all participants understand its scope and purpose.