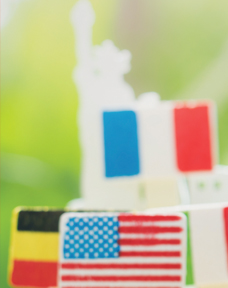 For funders and other investors, international arbitration is a particularly attractive area of investment because of the high values of the claims, the speed of the proceedings, the potential for greatly reduced evidentiary costs, the greater predictability of the outcome than in litigation, the industry expertise of the decision-makers, and the high enforceability of arbitration awards. With respect to enforceability, there are currently 157 jurisdictions worldwide in which a party can enforce an award through the 1958 United Nations Convention on the Recognition and Enforcement of Foreign Arbitral Awards (commonly known as the "New York Convention"), which is the main vehicle for enforcing arbitral awards worldwide. In addition, more funders are financing claimants in investor-state arbitration under bilateral or multilateral investment treaties and free-trade agreements against sovereign governments, which has lead to several influential rulings by arbitral tribunals and at least three new investment treaties that contain provisions requiring disclosure of third-party funding.

There are many different types of clients for third-party funding, such as corporations, law firms, individuals, and sovereign states. Funding is most readily available for the plaintiff or claimant side of the case, but some funders are willing to support the defense side. The client will be asked to provide extensive information about the case, which may be confidential or privileged under applicable law, to the potential funder so that it may assess the claim. If the funder approves of the client's case, the client would then negotiate a detailed funding agreement with the funder. The funding agreement is typically a network of contracts that may contain provisions addressing non-disclosure, confidentiality, the method of calculating the funder's fee, a cap on attorney fees and costs paid by the funder, whether the funder would pay an adverse costs award if the funded party loses under the "loser pays" rule of cost allocation (or if the arbitrator or judge orders the funded party to pay the attorney fees of another party), and under what (rare) circumstances the funder may terminate or withdraw from the funding arrangement before the end of the case, as well as many other provisions.

Increasingly, funders are engaging in portfolio financing of law firms, whereby the third-party funder's investment is based on predicted returns from multiple cases in which the law firm represents its clients. Funders have also entered into joint ventures or ownership interests involving their underlying clients, including ownership of law firms in the U.K. and possibly Washington D.C. These newer phenomena are still too rare to assess their impact. Third-party funding of class action litigation or arbitration is not yet prevalent in the U.S. for a variety of reasons beyond the scope of this article.

A two-thirds majority of states in the U.S. allow third-party funding, at least to some degree. Third-party funding of small-scale consumer disputes has been prevalent since the early 2000s and is now regulated in a strong minority of states due to concerns about predatory lending and consumer protection. Large-scale funding of commercial disputes is treated very differently, however, and exceptions or exemptions to the laws that now protect consumer clients are usually carved out for large commercial disputes. Since the U.S. is an arbitration-friendly jurisdiction, third-party funding of international arbitration is typically upheld and enforced by U.S. courts in commercial international arbitration cases that do not involve ordinary consumers as parties.

In addition, third-party funding may affect the applicability of evidentiary privileges or an attorney's conduct under the attorney ethical rules relating to confidentiality, evidentiary privileges, professional independence, conflicts of interest, fee-splitting with non-attorneys, the client-lawyer relationship, and settlement. In 2012, the ABA Commission on Ethics 20/20 issued an informational report on "alternative litigation finance" detailing how attorneys should handle their professional ethical obligations when third-party funding is involved in their clients' cases.

The newly published second edition of "Third-Party Funding in International Arbitration" (Wolters Kluwer: 2017), co-authored by this article's author, addresses the issues discussed in this article in greater detail, examines the laws on third-party funding in over 60 countries, examines how third-party funding is being incorporated into arbitral rules and investment treaties, and provides a reliable resource for users and potential users who may wish to tap into and make use of this distinctive funding tool.