If Justice Kennedy retires after the current Supreme Court term and another justice in the mold of Neil Gorsuch were to be appointed, a fifth vote on the side of property owners seems more likely. 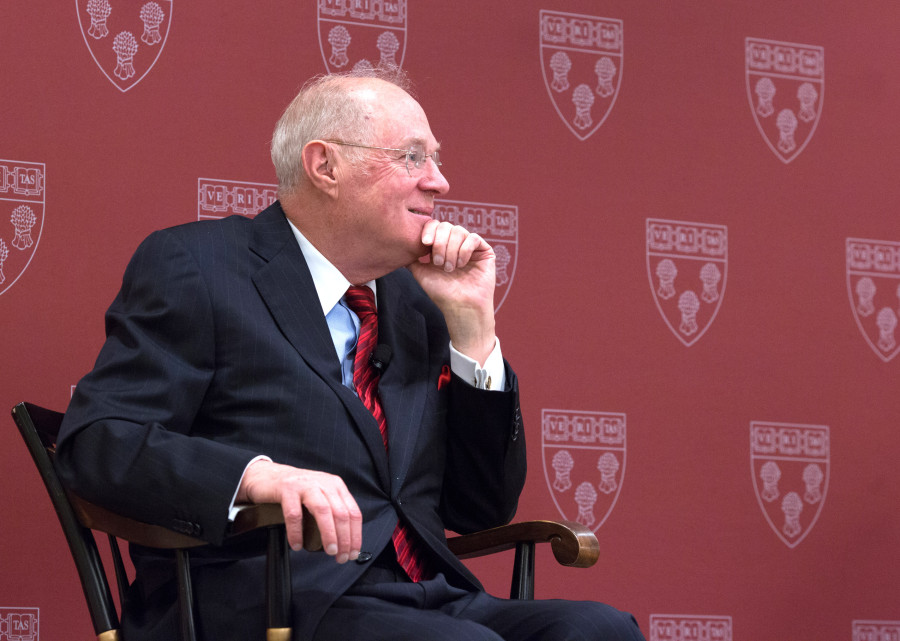 Justice Anthony Kennedy during a 2015 appearance at Harvard Law School.

The U.S. Supreme Court this month denied certiorari in the case of 616 Croft v. the City of West Hollywood. It was a disappointing denial for property rights advocates because it leaves open a loophole that California governments use to extort money from homebuilders.

For decades, local governments have realized that the permitting process gives them immense power over landowners. In the face of a bureaucrat with the right to say "no" to a development, new business, or dream house, landowners often have no choice but to acquiesce. They may be asked to give up land or property rights, make capital improvements for the general public, or even hand over large sums of money. These conditions are generally called "exactions."

A few years ago, Jonathan and Sheila Lehrer-Graiwer bought two lots in West Hollywood. Their dream? Replace the two aging, outdated single-family houses with a modern 11-home condominium. The City of West Hollywood praised the plan--after all, it added nine new homes to a city that desperately needs new housing. They also lauded the architectural design and commitment to environmentally-sensitive construction. Then the city demanded over $500,000 as an affordable housing fee.

In 1997, the Supreme Court recognized an important constitutional limit on exactions demanded when people seek discretionary permits, such as building permits. In that case, Nollan v. California Coastal Commission, the Court held that there must be a "nexus" or substantial relationship between conditions imposed on development and harms caused by the development itself. In a later case, the Court held that exactions must also be "roughly proportional." Finally, in 2013, the Court explicitly recognized that the exact same limits apply to monetary fees.

In each of those cases, the Supreme Court was looking at conditions imposed by an agency at the permitting phase. In other words, the agencies waited for an application permit, then determined the property interest or fee that they wanted to demand from the property owner. These types of exactions unquestionably fall squarely within the Supreme Court's decisions and must always be substantially related and roughly proportional to some harm caused by the development.

But courts in several states have created an exception to these requirements. If the conditions are passed legislatively--for example, by creating a schedule of fees to be demanded based on square footage or number of units built--courts do not analyze using the nexus and proportionality requirements, falling back on a far more lenient standard of review.
To the landowners forced to pay a fee, how it is passed is a difference without a distinction. But in court they discover that almost all bets are off: courts suddenly uphold disproportionate fees that have little to no relation to any harm caused by the development. 616 Croft is the perfect example: adding 9 net new units to the housing supply actually helps solve West Hollywood's housing crisis. Nonetheless, the California Court of Appeal upheld the fee.

There's no constitutionally sound reason why a fee that would be unconstitutional when applied to a single person is constitutional when applied to every homebuilder in a community. As Justice Thomas has previously written: "A city council can take property just as well as a planning commission can." In fact, dissenting when the court declined to hear a similar case last year, Justice Thomas said that the issue needed to be resolved "at the earliest practicable opportunity."

Which raises the question: why did the Court pass on 616 Croft? Granted, such questions are fun to debate though ultimately impossible to answer. However, last term saw the Court issuing the opinion Murr v. Wisconsin, authored by Justice Kennedy. The decision was a setback for property owners, granting states great leeway to redefine "property" at will in ways that remove long-held rights.

The Court only requires four votes to accept a case, but justices may often choose to forego review if they are unsure that they will be able to obtain a fifth vote once the case is heard. As bad as it might seem to leave harmful precedent in place at the state or federal circuit level, it's disastrous when it is solidified nationally by the Supreme Court.

There have been persistent rumors that Justice Kennedy may retire after the current Supreme Court term. If that were to happen--and if another justice in the mold of Neil Gorsuch were to be appointed--a fifth vote on the side of property owners seems more likely. Let's hope that the denial in 616 Croft signals not an abandonment of property rights by the high court, but a calculated decision to wait for the right opportunity to ensure their protection.

Jeremy Talcott is an attorney for Pacific Legal Foundation.