About 10,000 Bay Area students have since participated in the interactive program. 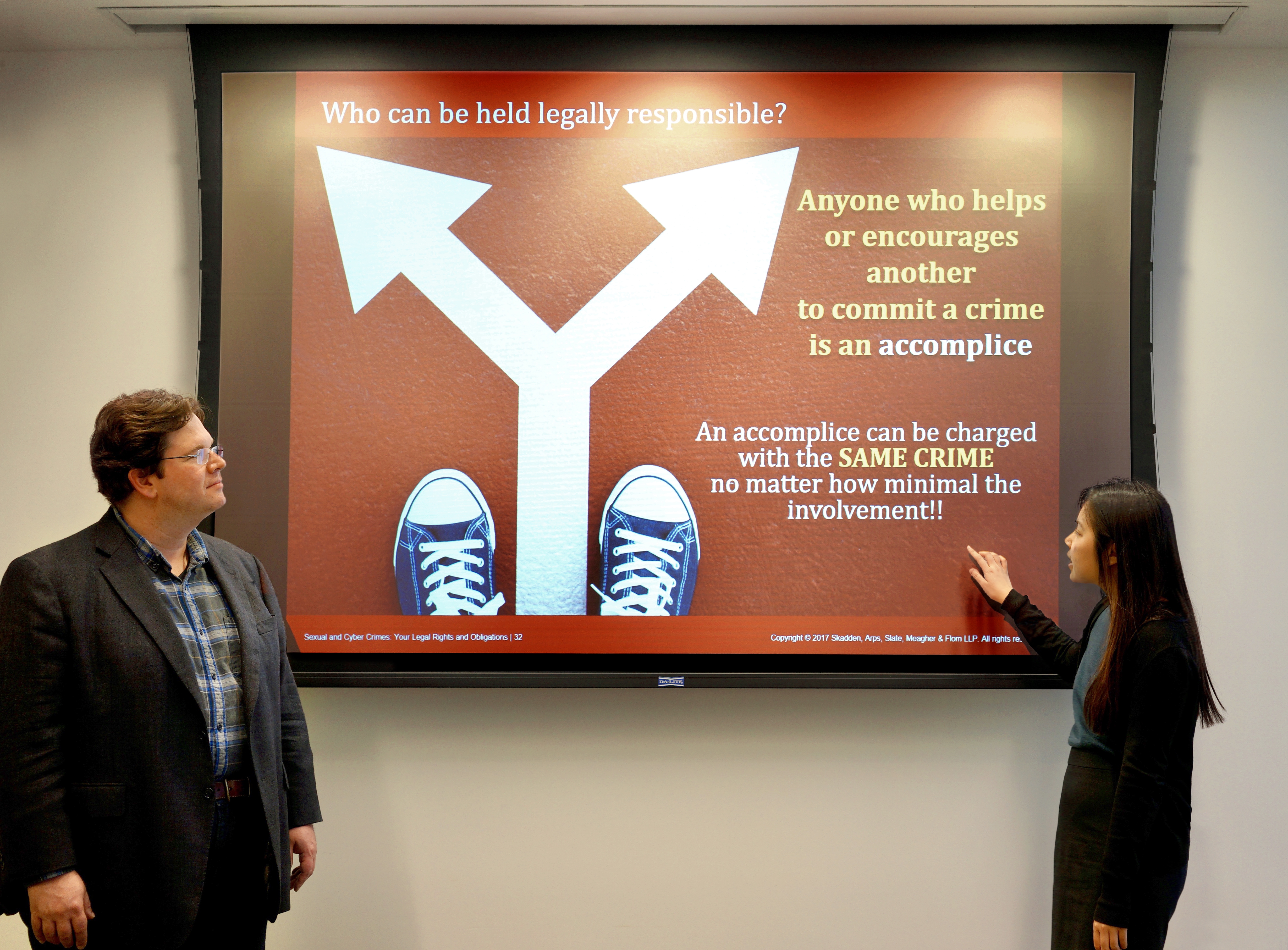 Four years ago, Skadden, Arps, Slate, Meagher & Flom LLP wanted a different approach to pro bono work. A Saratoga teenager who committed suicide after photos of her assault circulated online impacted much of the firm's Palo Alto office. With the largest technology boom in history in the firm's backyard, attorneys decided to go into classrooms.

The result was "Know Your Rights and Know the Law: Sex, Bullying and Social Media," an interactive workshop that engages students about the cross section of social media and sexual activity. Roughly 10,000 Bay Area students have participated in the program, the firm said. It's the first program that focuses on the legal rights of students within the realm of social media, the firm said. The program has since expanded to Los Angeles with 52 attorneys participating over all.

"This has probably been our most popular pro bono program. Pro bono tends to be more litigation focused but this has really gotten people mobilized," said David C. Eisman, head of Skadden's entertainment group.

Participating attorneys said it's common for over half the students in a setting to say they've experienced cyber bullying themselves or know someone who has been a victim of it.

"Being drunk, they are not in a legal capacity to consent. You cannot consent if you're intoxicated," Eisman said.

There are many other scenarios in which students may not know if they are crossing the line. For example, a girl finds out another girl is pregnant and posts a Photoshopped picture of the girl supposedly nine months pregnant. The pregnant girl is tagged in the post and lots of people see it. The poster could be charged with cyber bullying.

Stacy E. Kray, head of pro bono services in the firm's Palo Alto office, said she was hesitant about being able to talk about such sensitive topics with kids, but that they were engaging. "I'm always surprised at how much they do open up and ask questions," Kray said.

The incident that helped spur the firm's campaign was that of Audrie Pott, whose classmates photographed and circulated pictures of the teenager being assaulted as she lay unconscious during a night of partying. The photos went viral, and Pott hanged herself.

"Teens live in a culture where they might blame Audrey for getting into this situation. The law doesn't view it that way. The law is much more black and white," said Kray, who practices environmental and transactional litigation.

"Technology changes first and then we react. As a result we have the tragic stories of Audrey Pott because there wasn't enough protection in place. There weren't school-wide mandatory trainings on digital literacy and I think that's changing thanks to Skadden," said Inés Kuperschmit, co-executive director and co-founder of Learning Rights Law Center, who was brought in to help with the pro bono work.

The program's pro bono partners include Legal Advocates for Children and Youth, a program of the Law Foundation, and in San Francisco, Legal Services for Children. Skadden also trained attorneys from 25 companies, including Cisco and Hewlett Packard.

Attorneys of various litigation backgrounds are trained to give workshops. The program uses an interactive model that includes live polling, Eisman said.

"We found it has been working very, very well. The students seem to like the format," Eisman said.

According to a state law that went into effect last year, the California Youth Health Act, or AB 329, schools are mandated to instruct grades 7 through 12 on a range of consent topics, including sexual harassment and sexual assault.

"Few schools are aware of that legal requirement. It's been a great conversation starter," Kuperschmit said.