‘Coming of age at the DMZ’

Jack Walker's powerful, insightful and moving "Eye Corps: Coming of Age at the DMZ," details his experiences as a recon patrol leader in Vietnam. 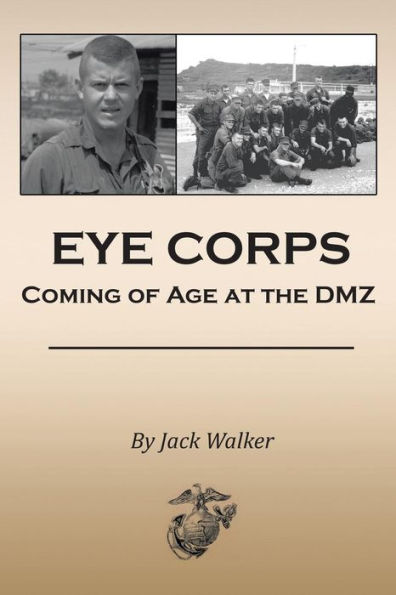 "There were many reasons to ignore the political debate back home: it was depressing; it was distracting; it was incomprehensible from this distance. I was plenty busy surviving, supporting my men, handling company paperwork... and keeping my head screwed on. Meanwhile, I was developing a gut feeling that the reason for this war was neither stupid nor evil. It was just missing. But if I dove into politics, and if I found that we were here because of old tropes or domestic politics -- that there was no good reason for my guys getting killed and hurt and brain-fried -- I wasn't sure how it would affect me. So I avoided the subject. Still, it bothered me."

This excerpt is from Jack Walker's powerful, insightful and moving "Eye Corps: Coming of Age at the DMZ," his self-published book that details his experiences as a recon patrol leader in Vietnam. Walker served from 1964 to 1968 -- a time when our country's involvement in the conflict escalated dramatically. When Walker volunteered for the Marines in 1964 when he was 22 years old, there were about 23,000 American troops in Vietnam and the U.S. had lost 416 soldiers. During 1966, the year Walker first set foot in Vietnam, 385,000 troops served in Vietnam, and 6,350 of them never came home. By the time Walker left the military in April 1968, well over a hundred thousand more U.S. troops had entered the country, and more than 11,000 additional Americans had perished there. His service in Vietnam had been marked by bloody firefights with reinforced Vietnamese forces, heavy artillery bombardment of U.S. bases, and escalation along the Cambodian border -- all preludes to the turning points of the war in 1968.

The public's perception of the war changed as his did. In late 1965, only about a quarter of Americans felt it was a mistake to send troops into Vietnam, and protests were mostly limited to student groups and the burning of draft cards. By mid-1968, the end of Walker's narrative, more than half of Americans had come to believe that entering Vietnam was a mistake. Hundreds of thousands marched against the war, and it became the defining political issue of the day. As the book beautifully recounts, Walker's passage -- from ignorance about Vietnam, to general support of the war effort, to asking the difficult questions, to eventual opposition to the war -- mirrored the progression of much of the country. But Walker's education and evolution were not cheaply earned.

During Walker's wartime journey, he saw action in the tall mountains and thick jungle surrounding the Khe Sanh Valley and regions near Dong Ha, within 20 kilometers of the Demilitarized Zone's southern edge. He watched Marines under his charge get killed and wounded, served with heroes and scoundrels, witnessed the deaths of unarmed civilians, lost his virginity (twice -- to understand you need to read the book), earned a slew of medals, met President Lyndon Johnson's daughter Lynda the day she announced her engagement, served at the prestigious Marine Barracks at Eighth and I streets in Washington, D.C. (for what may have been the shortest stint by a Marine officer) and, in due course, became an anti-war protester. It was quite the odyssey for someone who started his trip as a self-described indolent young man from the Bronx.

Over a spicy Indian meal on an unusually warm evening in Los Angeles, Walker explains to me the complex impact of Vietnam on his life: "I was very lucky -- I grew up and the experiences opened my eyes." He continues: "Vietnam and the Marines taught me about teamwork, how to get things done, the importance of command presence and a strong feedback system, how to communicate with people and the power of putting people in positions and places where they can succeed." But Walker is very aware of the costs. "War is really hell -- it corrodes the soul. Killing humans became too easy." That awareness helped change the course of his life. Walker was on the fast track for significant promotions in the Marine Corps, but instead opted to leave the service behind.

In one of the more moving accounts in the book published in 2016, Walker describes receiving a letter from Gregor Wise, an officer who was his senior and who had befriended and mentored him in Vietnam. The correspondence was sent to Walker while he was stationed in Washington, still a Marine but contemplating the next chapter of his life. In the letter, Wise writes that he has decided to resign his commission and become a priest. He tells him that his dream, after completing his seminary studies, is to teach history and ethics at Walker's alma mater, the University of Notre Dame:

"I lay some of the responsibility for my decision on your doorstep. At our good-bye dinner in August, you thanked me for coaching you on your journey from boot [camp] to leader. I deflected your kind words then, but yes, Jack, I did try to help you on your journey. It was a pleasure. I recognized your talents when we first met.... You asked good questions, made sound decisions, and always gave it your best shot in spite of large and small obstacles. Frankly, that inspired me (and your men) to do the same. That's leadership, so thank you."

Wise never made it to the seminary -- he wrote the letter the day before he died in combat. Walker writes: "I read the letter again. Then I stood up, took a deep breath and commenced the rest of my life, powered by the thought that I once had a very good friend who loved me, who helped me become a man, and who would want me to keep giving it my best in spite of the giant hole in my heart."

Walker never stopped giving it his best. He went on to have a brilliant, impactful career. He attended Harvard Law School, joined Latham & Watkins, and was one of the small number of partners most responsible for transforming the firm from a relatively unknown, West Coast firm into an international juggernaut. He eventually became its managing partner, a trusted adviser to a slew of business and community leaders, and a sought-after member and leader of nonprofit boards.

And, along the way, he made a point of befriending, teaching and mentoring. Throughout his adult life, Walker followed Gregor Wise's example and helped others on their respective journeys. Scores of young lawyers, business and civic leaders, nonprofit executives, partners in his and other law firms, news reporters and many others benefited from Walker's kindness, intellect, passion and superb instincts. I am fortunate to have been one of those individuals. Twenty years ago, Walker co-chaired the selection committee that took a chance on me and chose me to become the leader of Public Counsel. And in the decades that followed I, like so many others, regularly sought Walker's advice on the decisions that greatly mattered in our lives.

Walker's book about his coming of age in Vietnam is powerful, thoughtful and engaging. But equally so is the life Walker led after he came of age. The hard and expensive lessons of Walker's youth led to a big-hearted life, full of wisdom and generosity that touched so many.

Fifty years ago, Gregor Wise, a young man full of promise who died way too young, said it best about Walker: "you always gave it your best shot in spite of large and small obstacles. Frankly, that inspired me and your men to do the same. That's leadership, so thank you."