Law firms are no match for a professor and his Twitter

What started as a string of tweets by a 34-year-old Harvard Law School lecturer has resulted in a movement to eliminate arbitration agreements for law firm associates. 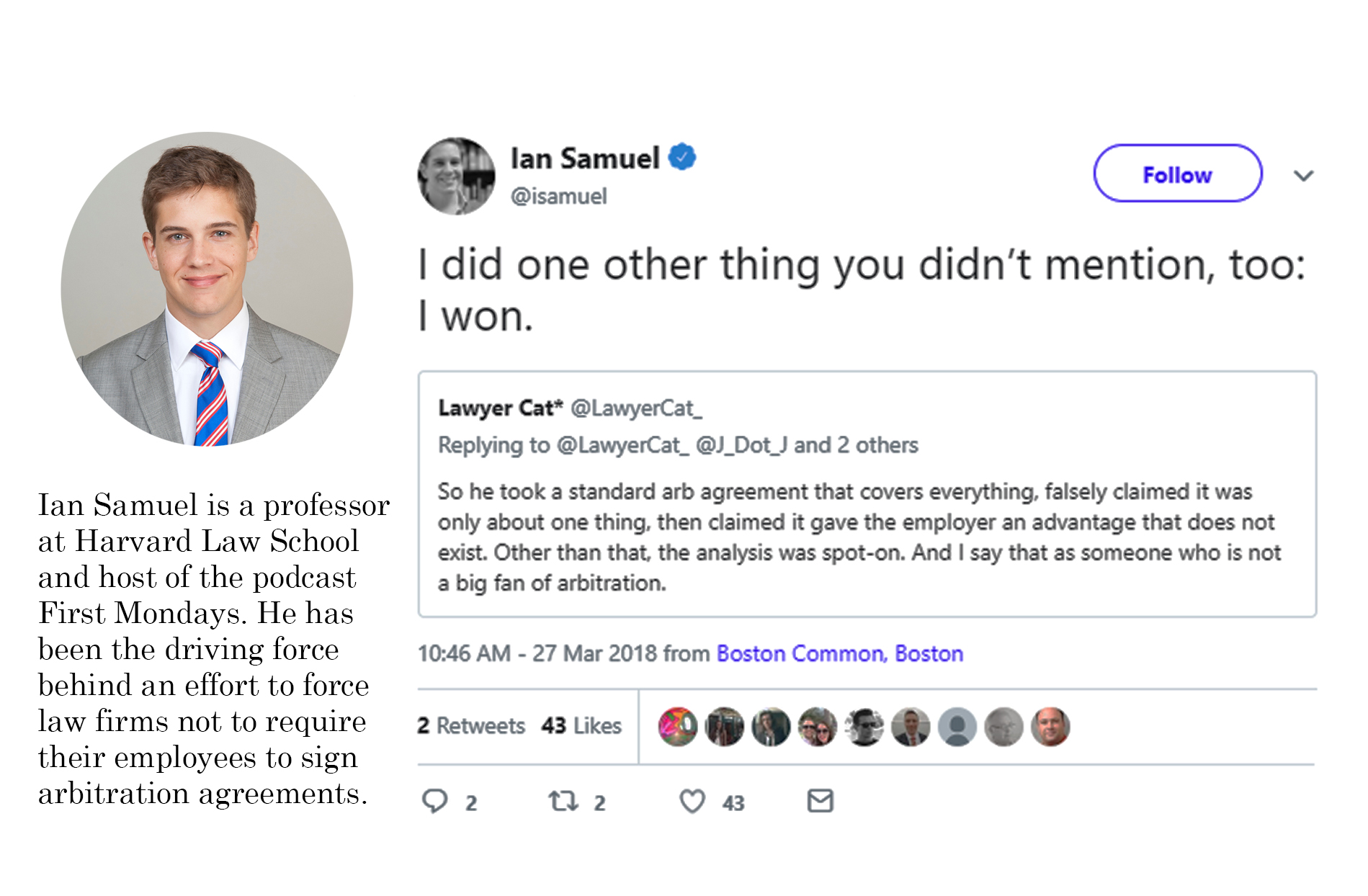 Ian Samuel, a lecturer at Harvard Law School and the driving force behind an effort to get rid of employee arbitration agreements at law firms, gives a triumphant response to a fellow Twitter user who took issue with his efforts.

What started as a string of tweets by a 34-year-old Harvard Law School lecturer has resulted in a movement to eliminate arbitration agreements for law firm associates.

In one tweet, Samuel said: “This secret arbitration requirement is explicitly made applicable to Title VII claims, including sex and race discrimination. You would have to be willfully ignorant not to get what this is about.”

In another, he said: “And if some bothersome woman should tell people that some Munger partner got handsy at a firm event, fear not: there’s a clause for that.”

Samuel ended the thread with: “I think this is the grossest thing I’ve ever heard. Munger ought to be ashamed of themselves. And I will be making an extremely large fuss about this. Talk to y’all soon.”

Nineteen hours later, the firm responded, issuing a statement — via Twitter — that they “were wrong,” that they were “fixing it” and that they would “no longer require any employees, including summer associates, to sign any mandatory arbitration agreements.”

“A listener of the show thought that I would think it was interesting, and I did,” he said in an interview Thursday. His show, which he co-hosts with Daniel Epps, an associate professor at Washington University School of Law in St. Louis, has “a reasonably dedicated following among appellate nerds and law students,” Samuel said.

According to Samuel, this provided the duo with “a little bit of a larger platform than two junior law school academics” would typically have.

Asked if he thought his tweets were responsible for Munger Tolles’ policy change, Samuel replied, “It seems pretty clear actually that that’s what happened.”

Although Munger Tolles did not express any reason for the change, “the level of criticism that they were attracting ... in the 19 hours or so that this agreement became public, [and that] they decided to change their [policy], leaves no room for doubt that they were responding to an enormous public outcry,” Samuel said.

On Monday, less than 24 hours after Munger Tolles “backed down” and agreed to reverse “this obnoxious policy,” as phrased by Twitter user and Michigan Law adjunct professor Eli Savit, Orrick, Herrington & Sutcliffe followed. According to the firm, Munger Tolles’ statement, and the conversation around it, prompted them to accelerate their review of mandatory arbitration.

“Like many law firms, we have been reviewing our policies in the wake of the #MeToo conversations,” it said.

“While the practice of mandating arbitration of employment-related disputes has been relatively common among law firms, we agree with the sentiment that industry-wide change is needed,” it continued.

Ending with, “Therefore, effective immediately, irrespective of whether there is a pre-existing agreement to arbitrate, all firm counsel, associates, staff and other employees will have the option, but will not be required, to pursue arbitration should a workplace issue arise.”

Of course, the episode pointed up the power of social media and of the #MeToo movement. But it also is a reminder that in the fierce competition for the brightest law school graduates, top law firms cannot afford to ignore students’ demands.

“Law students are smart and law students are at least 50 percent, if not more, women and they’re looking for firms that are actually committed to their anti-harassment message and the only way to do that is to get rid [of these agreements],” said Todd Wulffson, Orange County managing partner of Carothers DiSante & Freudenberger LLP, which has never required its employees to sign arbitration agreements. “You can’t make a firm commitment to resolving sexual harassment in the workplace if it’s all confidential,” Wulffson said.

In the wake of the issue, UC Berkeley School of Law students and alumni organized to write a letter to the administration. They requested that Berkeley Law’s Career Development Office prohibit “any employer that requires any employee, including associates, staff, or summer associates, to agree to, as a general condition of employment: (1) a mandatory arbitration agreement, or (2) a non-disclosure agreement that covers discrimination, harassment, or other workplace misconduct” from using the school’s services, interviewing facilities, or jobs posting database.

Berkeley Law student Nate Brown, Class of 2018, spearheaded the campaign and was the letter’s primary writer.

“I’ve been very involved on campus as the co-chair of the Consumer Advocacy and Protection Society, and mandatory arbitration is a big issue in the consumer law world,” Brown said in an email. According to Brown, “This week’s tweets and writing by Ian Samuel, Dan Epps, Leah Litman, and Deepak Gupta,” inspired him to write the letter.

In his response, which Brown shared with this reporter, Chemerinsky said that, although he had not heard about the issue, he found it troubling.

“I am going to ask ... our CDO office to immediately look into this,” he said. “I also want to carefully think through how the law school should best respond and how we should best work with other law schools on this,” he continued. “I assure you I take this very seriously. I am glad to discuss it with you and others. I just want to be sure that we gather all information before we take any action.”

Leah Litman, an assistant professor of law at UC Irvine, acknowledged that some arbitration agreements are worse than others and not all require confidential arbitration. Some firms, Litman said, are arguing that, as long as students are made aware of these agreements before they accept a job with the firm, there is no reason that they should be pressured to eliminate them.

“Mirror disclosure is not enough,” Litman said. “If there is a solution to this, it has to kind of come with the support of law schools and collective agreement among law students,” she said.

While Samuel’s message has been, seemingly, well received by members of legal academia, some Twitter users are quick to point out what they see as flaws in his argument.

“So he took a standard arb agreement that covers everything, falsely claimed it was only about one thing, then claimed it gave the employer an advantage that does not exist,” wrote a Twitter user with the handle @LawyerCat, adding, “Other than that, the analysis was spot on. And I say that as someone who is not a big fan of arbitration.”

Apparently unphased, Samuel replied, “I did one other thing you didn’t mention, too: I won.”