In a former life, Justice Moore served as a combat nurse in Vietnam in the Army Nurse Corps. She was awarded the Vietnam Service Medal, the National Defense Service Medal, and the Cross of Gallantry with Palm. She is a member of the Vietnam Veterans of America. Since 2008, she has chaired the Judicial Council's Veterans and Military Families Subcommittee. For nine years, she served as a mentor in a Veterans Treatment Court, primarily to women veterans. In 2015, her book "Gender Results" received a Benjamin Franklin award. (Cool Titles, 2014) 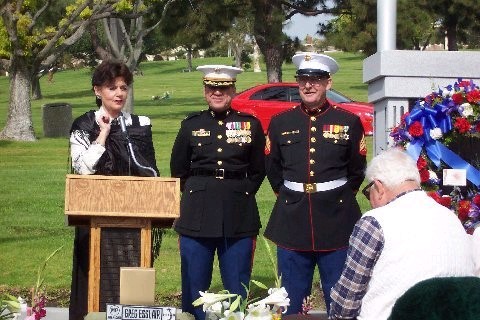 Every day 20 about veterans kill themselves. The experts don't really know why this is happening, surmising this self-destruction results from something that happened in combat. In 2016, 490 California veterans took their own lives. In 2014, about 65% of all veterans who died by suicide were ages 50 and older. Women veterans have particularly high suicide rates. All of them know how to use a firearm, and almost two-thirds pull a trigger.

When I came back to the states after serving as a combat nurse in Vietnam, I walked right into the middle of the Women's Liberation Movement. Once I realized that a nobody like me, a girl, the daughter of a high school dropout, could actually study at a university, I grabbed for that brass ring and never looked back. Then in the late 1990s, someone from the local chapter of Vietnam Veterans of America asked me to speak at a special event at the Richard Nixon Presidential Library. When I arrived, a vet was standing outside waiting to escort me inside. He used a cane because of an injury to his leg. He was polite and kind and sweet. Later someone told me that the man, Greg, had lived on the street for 15 years. But at that time, he was in his last year of college. Little did I know that evening, but a few years later, I would speak at Greg's funeral.

What caught most of my attention that night were the three rows of bedraggled men off to the side of the auditorium. They were wearing old fatigues and looked as if they were homeless and self-medicating. After I spoke, those men completely surrounded me. Each one had to touch me somewhere on my arm or shoulder or back. One stroked his pointer finger over and over the top of my hand. They just wanted to stand there and make contact with one of their nurses. I'm not sure it even registered with them that I was also a judge.

After other wars, soldiers came back with at least some amusing anecdotes. Reader's Digest used to have a column called "Humor in Uniform." One story was about a Sergeant driving a jeep in Korea. He held his arm out to signal a left turn and someone stole his watch. He jumped out of the jeep and took chase, to no avail. When he got back, his jeep was gone as well. But Vietnam vets didn't come home with fun stories. Those men at the Nixon Library, I realized, seemed to have only one positive memory from Vietnam, the nurses.

Sure, I had seen veterans standing at freeway offramps holding a sign in one hand and a tin cup in the other, but being surrounded by all those lost souls at the Nixon Library, some with tears in their eyes, shook me to my very core. Since that night, I have been involved with veterans' activities in one way or another. I also reactivated my license as a Registered Nurse. I still take the continuing education courses to keep it active.

Weeks before Greg's death one of the vets told me he was holed up in his room drinking himself to death. I mailed him a letter explaining how important he was to the chapter and what a shining example of success he was to all veterans. Had I known then what I know now, I would have done more.

I suspect some of our soldiers did things that make them feel ashamed. Also, I assume some made pacts with God or with their souls: "If can just live, I won't complain." I think that because when they woke up from anesthesia in Vietnam and we had to tell them they lost an arm, a leg or an eye, they'd often say something like, "Charley can't get me now; I'm goin' home." What kind of terror would a person have to face in order to feel relieved at losing a limb?

We went into Iraq in March 2003 and we've had our troops in harms way in the Middle East at least since then. Many from California were deployed from the National Guard or the Reserves, part timers. They were pulled from their civilian lives and sent far away. We don't know what happened to them or what they did over there. But we do know that many of them come back in a very troubled state, even when they don't have visible injuries.

Moral injuries are said to be a signature wound of those who served in Iraq and Afghanistan. They gnaw at the hearts of combat veterans. Largely based on World War II studies finding that the majority of soldiers in war did not ever fire their weapons because of an innate resistance to killing, Lt. Col. Dave Grossman's book points out there are great psychological costs on combat soldiers. He says that at the moment of truth when they could and should kill the enemy, the vast majority of combatants have found themselves to be conscientious objectors. Thus, in training our post-World War II soldiers, conditioning techniques designed to enable killing in the modern soldier have been utilized. Grossman's book says one researcher found a 95% firing rate among American soldiers in Vietnam as compared to estimates of only 15 to 20% firing at the enemy during World War II.

Since Vietnam, our soldiers have been psychologically enabled to kill to a far greater degree than during previous wars. There must be grave consequences when one overcomes the natural inhibition against killing. One thing we know for sure is that pervasive mental health issues are plaguing our veterans.

The term "moral injury" was coined by Dr. Jonathan Shay, a psychiatrist who treated combat veterans, primarily those who served in Vietnam, at the VA for several decades. A New York Times article about Shay states that after he suffered a stroke, he filled in the gaps in his education by reading "The Iliad" and "The Odyssey," and it was clear to him that his VA patients were echoing many of the sentiments expressed by the warriors in those ancient texts: betrayal by those in power, guilt for surviving, deep alienation on their return from war. Shay points to the words of Lady Percy in "Henry IV" as possibly the earliest historical reference to PTSD: "Thy spirit within thee hath been so at war, And thus hath so bestirr'd thee in thy sleep, That beads of sweat have stood upon thy brow, Like bubbles in a late-disturbed stream."

Major Erik D. Masicka asks us to imagine a transgression of core beliefs, values or morals that is so severe and traumatic that a soldier's very concept of right and wrong is fundamentally transformed. Masicka says that is a moral injury. The military is said to be slow in accepting that such a phenomenon even exists, but the branches of service are slowly coming around. The Army now mentions moral injury in its Family Fitness Program. The Navy and Marine Corps prefer the term "inner conflict."

Minnesota lawyer Brockton D. Hunter notes that while the majority of Vietnam veterans served a single tour in-country, many veterans of Iraq and Afghanistan have served two, three, four or more tours. "People aren't designed to be exposed to the horrors of combat repeatedly. And it wears on them," Gen. George Casey, Army chief of staff, told reporters in 2008.

What does all this have to do with the law? Suicide experts say we need to look beyond the usual risk factors, such as PTSD or a major depressive disorder, and address the role a major life crisis plays in veteran suicide. Lawyers and judges regularly deal with people undergoing major life crises. The legal community can play a role in veteran suicide prevention, beginning with asking if a client or party ever served in the armed forces. Preventative law is already in use to a certain extent. According to Hunter, prosecutorial sympathy for veterans has been significant, viewing veterans as less blameworthy than nonveterans, at least for low level offenses.

California has about 10% of all our country's veterans. The chances of a lawyer or a judge coming in contact with a veteran are probable. Intimate partner violence, whether the person is the victim or the perpetrator, employment problems and sexual minority status can be significant risk factors for veteran suicide. Restraining order petitions, employment matters and discrimination cases are omnipresent in our courts. Plus, in days gone by when we still had a draft, many service members tended to be young single men. In today's volunteer military, there are more and more older persons of both genders who have families. Where we find families, we find family problems. Like the rest of us, veterans face financial, insurance and mortgage issues and go through divorces. Few life crises get more major than a child custody battle. Veterans already carrying invisible wounds from military service can be teetering at the edge when trying to get themselves through a legal problem such as the fear of losing their children.

To a certain extent, lawyers are sometimes first responders since a veteran's ability to manage the uncertainty and frustration of the legal process might be seriously impaired due to something that happened in the military. It just might be the lawyer who first recognizes the need for mental health evaluation and treatment.

The VA says the warning signs of suicide are people threatening or talking about ways to harm or kill themselves. Additional warning signs are hopelessness, rage, anger, seeking revenge, acting recklessly, feeling trapped, increasing alcohol or drug use, withdrawing from family and friends, anxiety, mood changes or perceiving there is no reason to live. There is a 24/7 Veterans Crisis Line [1-800-273-8255 and Press 1], and it has a texting option [text to 838255]. To chat online, go VeteransCrisisLine.net/Chat. Skilled responders are trained for suicide prevention and prepared for crisis intervention.

Our armed forces placed their lives and their health on the line to protect all of us. The least civilians can do is to help watch over those who protected us. VA Secretary Robert Wilkie declared September the Suicide Prevention Month and called for all Americans to work together to prevent suicide among our veterans. 