Ron Richards, a Beverly Hills attorney, breaks down the legal facts for viewers of popular show. 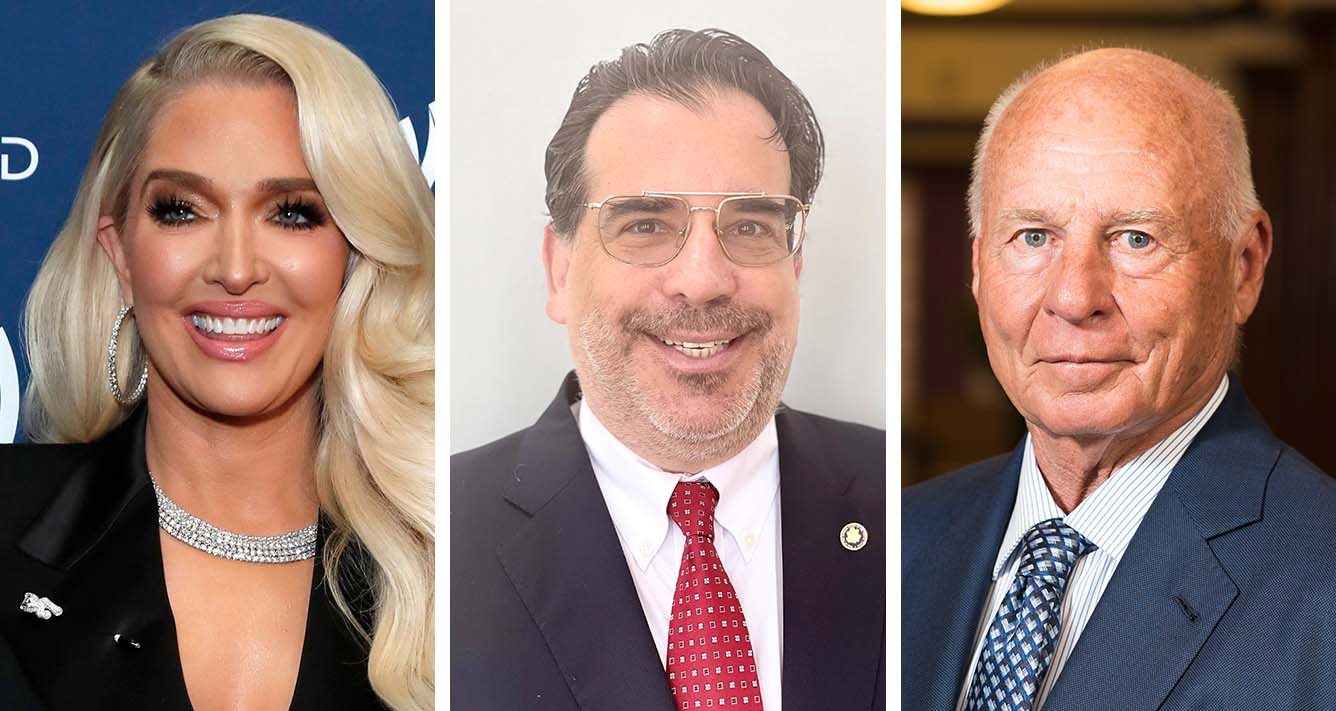 About once a year, a handful of women in Beverly Hills (or Malibu, or Bel Air, or Encino) are chosen to receive a diamond.

The diamonds are brilliant-cut, as big as grapefruits, rumored to guarantee their recipients up to millions of dollars, probably zero carats, and possibly no more than computer-generated imagery. When a woman receives one, from the television network Bravo, it means that she has become a cast member of the "Real Housewives of Beverly Hills," and not one whose role is to stay in the background and lend color to another woman's storyline. Recipients of the diamonds are the housewives. They are the main characters.

Viewers of the TV series have long held strong opinions about which of Southern California's wealthiest women are worthy of a Bravo diamond. Lately, though, the picks of some viewers are looking a little less traditional. In January, one commenter on Reddit wrote, to the tune of 193 upvotes, "Give Ronald Richards a diamond at this point."

Who is Ronald Richards? Well, he's not a housewife. But unlike a growing number of the reality show's cast members, who are reportedly migrating out to mansions in the San Fernando Valley, Richards, an attorney, is actually based in Beverly Hills, where one of his offices is located. He has another in Washington, D.C.

In the legal community, Richards might be recognized for his decades long civil and criminal defense career, as well as numerous cases that have yielded published opinions in state and federal courts. But for some viewers of the "Real Housewives" series, Richards' involvement in the dramas is significant enough that he warrants main character status - even though he's never appeared on the show.

In fact, he said he doesn't even watch it.

So how exactly did Richards become a household name in the more hard-core echelons of Bravo viewers? It all started last fall, with Tom Girardi.

It was, and is, a story shaking the California legal community to its core. Girardi - a titan of the plaintiffs' bar, known for the billions of dollars in judgments he's secured from corporations for victims, the outsized influence he wielded over the judiciary and State Bar, and a bevy of glamorous habits that include two private planes at his disposal and an exclusive table at Morton's The Steakhouse - was suddenly going down. There were accusations of embezzlement and millions of dollars in unpaid debt. There were lawsuits, involuntary bankruptcy filings.

In some ways, the story of Girardi's downfall is a local one, the significance of its legal minutiae accessible only to a legal community with the skills, experience, and professional appreciation of Girardi's influence to navigate it.

But there is another community, one that is no less detail-oriented or invested in Girardi's story, but is also rarely equipped with the legal skills to immediately understand the developments. If the name "Girardi" evokes for the legal community high-profile tort actions and record-setting settlements, it evokes for this other community an entirely distinct iconography: A singer named Erika Jayne, who has been a "Real Housewives" cast member since 2015 and also happens to be Girardi's estranged, and soon to be ex - wife. The $40,000 per month budget Jayne has said she spends to maintain her look. Her personal team of hair and makeup professionals, which she refers to as her "glam squad." The chapel in the Girardis' Pasadena mansion, which is now up for sale. One of Jayne's more memorable taglines on the show: "I'm an enigma, wrapped in a riddle, and cash."

This community is the viewers of the reality show, who want to understand the legal developments of Girardi's downfall in part because they will shape Jayne's storyline for the upcoming season of the reality series. But they are invested for another reason, too. These viewers want to fact-check the Girardis' loudly wealthy lifestyle as it is depicted on the show against sources that haven't been vetted by the Girardis themselves. These are viewers who understand - and want confirmation - that fame and wealth are often a mirage.

For those viewers, there was Richards.

Weeks after he secured a key dismissal of a case involving federal marijuana charges - the first dismissal of its kind in the nation - Richards began tweeting about Girardi.

"Previously, I had tracked other attorneys that had compromised positions both in ethics and in how they were dealing with their clients. I had commented a lot on the [Michael] Avenatti case," Richards said in an interview last week. "When I started seeing symptoms with Girardi, I said, 'Wow. This is going to be one of the biggest frauds in client abuse in California history. So I'm going to start calling them out about it.'"

"I felt like instead of doing pro bono work on a case, this is a very important public service to try to fill a void," Richards added. As an attorney with nearly three decades of experience, he said he had the skills to lend "insight to the readers both in the legal field and in the general public, so they can actually understand the nuances of a potential fraud, and will be able to spot it next time before it occurs."

For many people who have been engrossed by Girardi's downfall, Richards' Twitter feed has become a go-to resource. He follows the increasingly complex web of litigation against Girardi closely, tweeting updates sometimes minutes after they appear on the court dockets, uploading court filings, and providing legal analysis.

When he first started tweeting about Girardi last fall, Richards had no intention to cater specifically to viewers of the Bravo show. But the viewers - who were already beginning to dissect the lawsuits and bankruptcy filings against Girardi on Reddit, social media, podcasts, and YouTube videos - quickly found Richards. They posted, and continue to post, most of the replies to Richards' tweets. They launched forums online discussing his takes and intentions. Some began to invite and feature him as a guest legal analyst on their YouTube series and podcasts.

Richards increasingly came face to face with the show's cast members, too. In March, he appeared as a guest on the podcast "Dishing the Drama" with Dana Wilkey, whose namesake host was a former cast member on the show. Wilkey, who has never held a Bravo diamond, is perhaps best known among viewers for sporting $25,000 sunglasses in an early season.

A current housewife, Dorit Kemsley, tweeted Richards in February, suggesting his reporting on the Girardis was bullying.

On Reddit forums, some commenters noted Richards had represented the late husband of Taylor Armstrong, another early cast member, a decade earlier. Armstrong's husband committed suicide after the filming of the show's second season in 2011 amid allegations of fraud.

Sharrell Lloyd, the host of YouTube channel "Sharrell's World," has featured Richards as a legal analyst of the Girardi story several times in recent months, and said the attorney has become an "extremely valuable" contribution to the Bravo community.

"I reached out to him because I came across his Twitter account, which was detailing what was going on with the Girardi lawsuits, and he put it in layman's terms," Lloyd said. The TV show often skims "over some of the facts if they even bring up the issues at all. And I found that my audience, which is almost 300,000 subscribers, wanted to know more of the details of what was going on. Sometimes it doesn't add up, what's being said on the show."

While her audience likely would have been interested in the Girardis' downfall even if the main players hadn't been famous, since there were so many victims involved, Lloyd said the way the Girardis spent years brandishing their wealth and power added to the story's appeal.

Noting Girardi made occasional appearances on the "Real Housewives," Lloyd said the attorney "makes the case interesting because he's always going around ... saying he's the best attorney there ever was," she said. "And then we find out you're not the best."

"For years Erika would just blow money, spend $40,000 on a glam squad for someone to do her hair, and then you find out that's stolen money. I mean, that's very interesting," Lloyd said. "She started out really loved on the show ... and now this. Her reputation has really shattered at this point."

"That's what I love most about [Richards]," Lloyd said. "He comes on ... and breaks it down where we understand it. And he doesn't have to do it. He's a busy man."

The role that Richards now finds himself in - that of an expert who caters to pop culture tastes - is not unique, even in the legal community. In recent years, professionals in a variety of industries have sought to parlay their expertise in one field into an entirely different career: that of an influencer, whose business is to provide commentary rather than to practice in their professed industry. For "Real Housewives" viewers, there is at least one other local attorney who has been offering takes on the Girardis' legal matters: Emily D. Baker, who was a Los Angeles County prosecutor for a decade before rebranding herself as a legal commentator, "The Badass Lawyer."

Richards said he is not interested in this kind of transition. "There are some lawyers that are nonpracticing lawyers. They want to become talking heads," he said. "That's their job."

"The difference between myself and these other lawyers is I have a full load of cases. I'm in courts, both in the appellate and trial level all the time. I try to bring realistic comments to the public that's based on real experience," he said.

"With me, I'm basically providing content for lawyers and the public. I try to divide it up between stuff that only a lawyer would like, versus stuff that ... fans would like. I try to serve both masters."

Richards added he does not want to continue covering cases involving legal misconduct in the future. "I hope the exposure will make lawyers realize that if they do improper things with your clients, it's going to be called out," he said. "I want to deter other lawyers from doing this, and realize we're watching."

Former CFO of Girardi firm must appear in bankruptcy court, even if he takes the 5th