In its fourth decade, big-case bankruptcy judge shopping has taken a nasty turn. 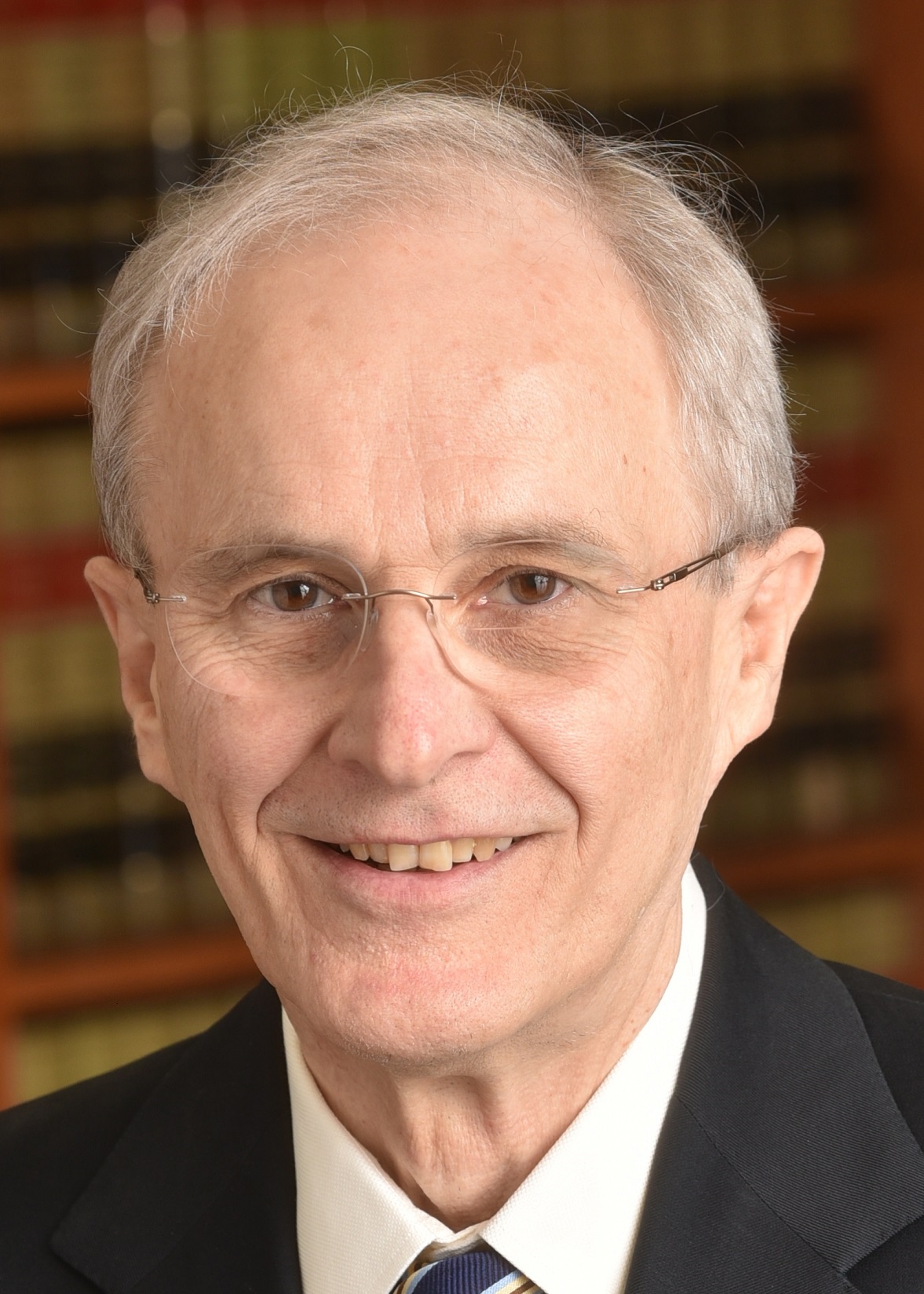 Lynn is the founder of the UCLA-LoPucki Bankruptcy Research Database. All of the statistics except the transfers are from One-variable studies replicable on the BRD website. 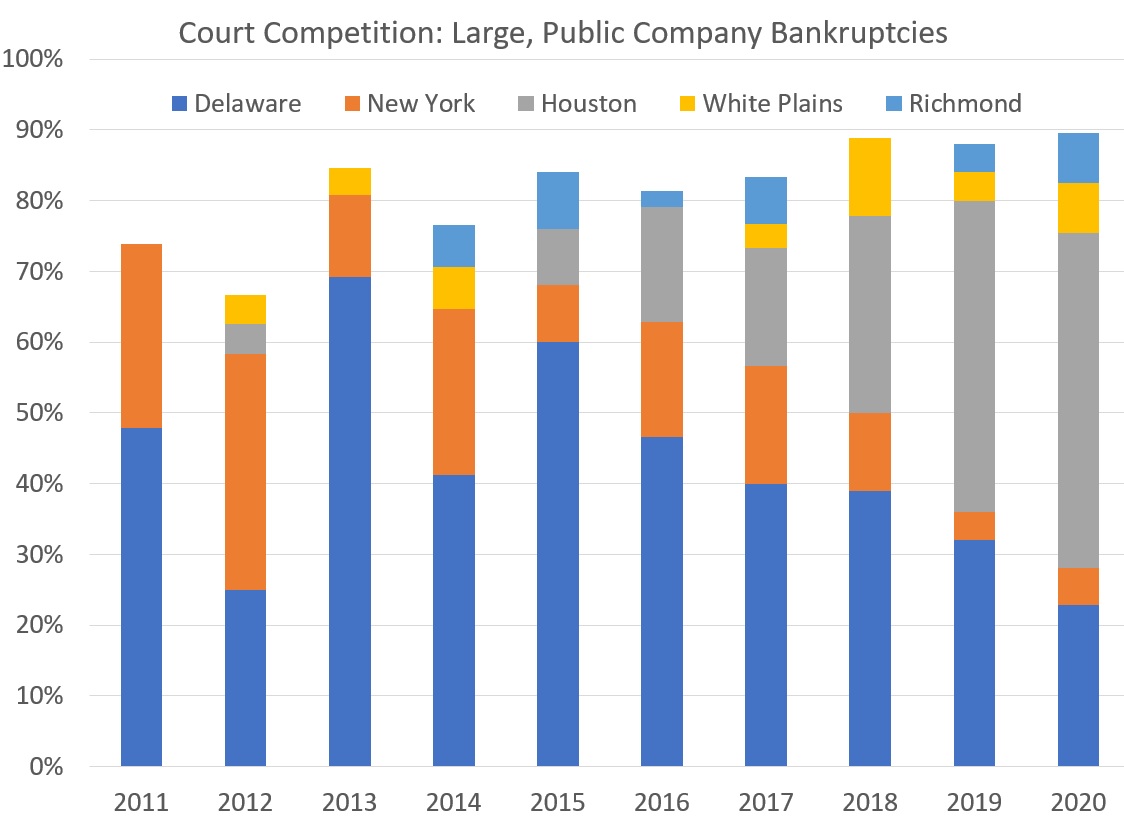 The graph shows the competition’s evolution from two courts to five over the past decade. The percentages are of all large, public companies filing during the years shown. In 2020, a heavy-filing year, the three new courts attracted twice as many filings as the two old courts. Delaware, which dominated in the 1990s and 2000s, saw its market share decline from 69% in 2013, to just 23% in 2020. So much for the myth that shoppers are just looking for predictable judges with big-case experience.

Second, the new courts’ appeal is that they increase the ability of shoppers to choose particular judges. File in Houston, the shopper gets Judge David R. Jones or Judge Marvin P. Isgur, in White Plains, Judge Robert Drain, and in Richmond, Judge Keith Phillips or Judge Kevin Huennekens. Fifty-nine percent of all large public company filings since January 1, 2020, went to just those five judges.

The old courts became forum shopping destinations by enabling shoppers to pick their judges. Despite the existence of a random draw, eight (62%) of 13 New York, large, public company filings in the early 1980s were assigned to Judge Burton Lifland. Delaware broke into the competition in 1990 as a one-judge court.When Delaware got its second judge, Chief Judge Helen Balick told prospective filers — before they filed — which judge would be assigned.

Those days are gone. Delaware now has nine judges. Delaware does not say how big cases are assigned, but from the assignments it appears all the judges are eligible. New York has seven judges and publicly states that case assignments are random. The game is judge-shopping, so the old courts may no longer be able to compete.

The new courts did not ascend effortlessly. The Southern District of Texas adopted a rule requiring assignment of all big cases filed in the district to a complex case panel consisting of Judge David R. Jones and Judge Marvin P. Isgur. Judge Jones gave press interviews and made no secret of his intention to attract the cases. To get them, Judge Jones is offering innovations such as scheduling hearings in cases not yet filed and confirming plans in as little as one day after the cases are filed.

In 2010, Judge Robert D. Drain moved from New York City, where he was one of several judges assigned by a random draw, to White Plains where he is the only judge. Now, filers from anywhere can choose Judge Drain merely by renting a shared office in Westchester County.

Every forum shopper takes the risk that the chosen court will send the case back. If it does, the forum shopper has to argue the case before a spurned judge who knows the shopper sought to escape. Wise shoppers choose a court only if they can be confident the court won’t transfer the case back to where it belongs.

In 2012, two years after her appointment as a New York bankruptcy judge, Shelley Chapman made headlines by transferring the four billion-dollar Patriot Coal case from New York to St. Louis. The St. Louis court confirmed a plan the following year. But by May of 2015, Patriot Coal had hired Kirkland to replace Davis Polk & Wardwell LLP and refiled in Richmond.

Patriot Coal recovered from its transfer in a little over two years, but for the New York bankruptcy court, the Patriot transfer may have been a death blow. The transfer was late in 2012. That year the New York court’s market share peaked at 33%. In 2019 and 2020, New York’s shares were 4% and 5% respectively.

Shoppers are getting better at choosing courts that won’t send them back. Of the 193 voluntary, large, public company cases forum shopped since Patriot Coal, not one has been transferred.

Shoppers are also wielding their augmented powers more aggressively. Excessive professional fees and “retention” bonuses paid on the eve of bankruptcy continue to fascinate the media and drain the estates. Judges allow shoppers to employ deathtraps and other coercive voting procedures. They shield individual wrongdoers from liability when only the corporation is in bankruptcy. Examples include the Sackler family and Harvey Weinstein. As a practical matter, there is no appeal from the most important decisions of a bankruptcy judge.

As the flow of cases has shifted from court to court, the price of attracting cases has increased. That price is paid in the loss of integrity. In the past decade, all but a handful of bankruptcy courts have been unwilling to pay.

The competition nevertheless continues to intensify. The bidding is long past the point where it is possible to attract cases without violating the Bankruptcy Code, Rules, and Code of Judicial Conduct. Changing the rules won’t help because the rogue courts don’t follow the rules. To end the competition, Congress must prevent shoppers from choosing their courts.