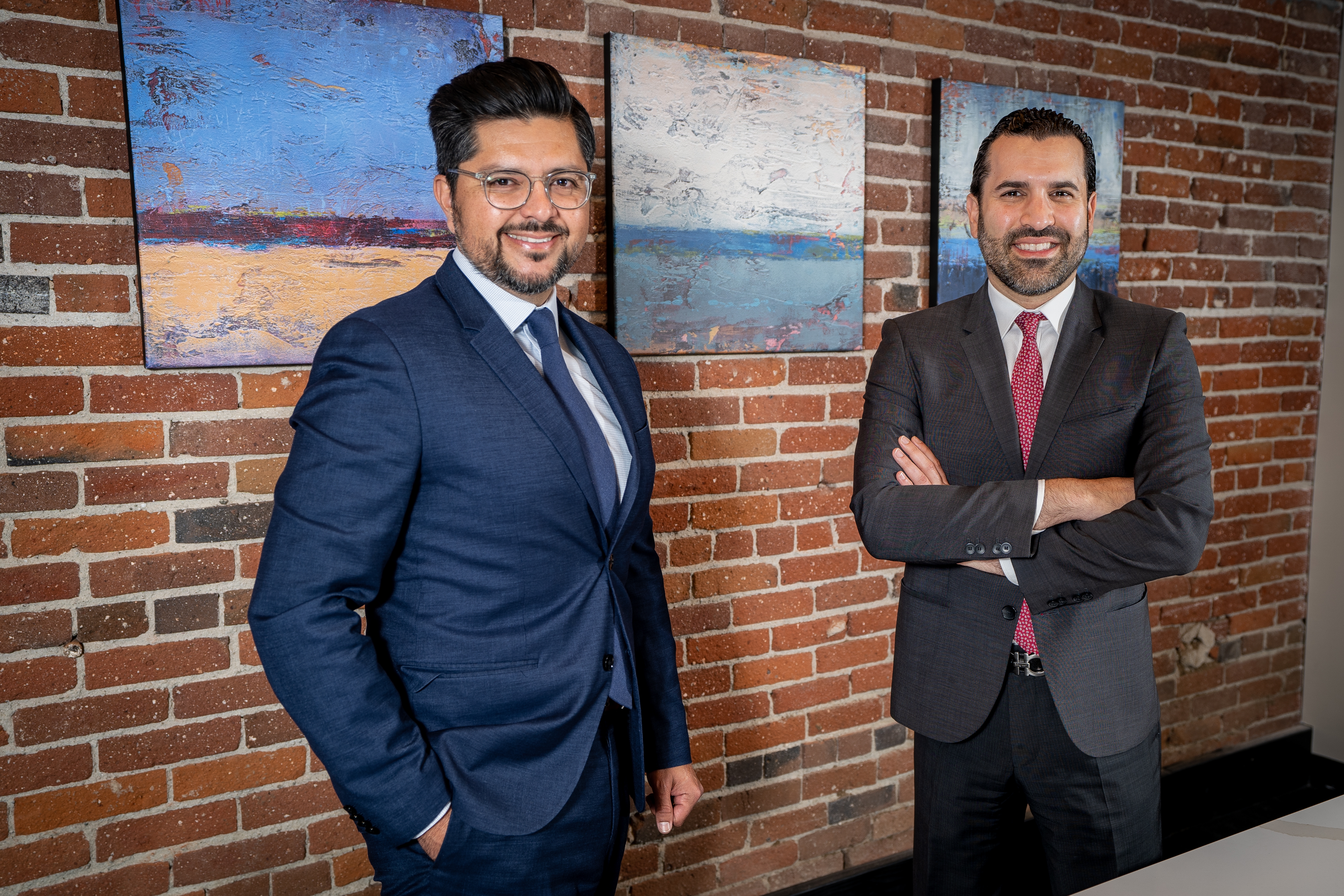 From left: Ron Zambrano and Neama Rahmani at their office in Los Angeles.

For a long time, West Coast Trial Lawyers’ co-founder Neama Rahmani wanted to be a judge. And when he started at Harvard Law School at 19, Rahmani said he had a pretty good idea about how to make that happen.

“My plan was big law, U.S. attorney’s office, bench,” he explained with a chuckle, “first state then federal.”

Rahmani was born in Orange County and grew up there, raised by Iranian parents who met while working as aviation engineers in Southern California. His grandfather was a judge in Iran, and although that certainly fueled his interest in the law, Rahmani said there was more to it.

“I just really loved our criminal justice system,” he recalled. “I distinctly remember watching the O.J. trial and being completely fascinated.”

After finishing his law degree and passing the bar in 2002, Rahmani spent seven years at O’Melveny & Myers LLP in Los Angeles, defending corporations Disney and Marriott as well as the Roman Catholic Church.

In 2010, Rahmani left to join the U.S. attorney’s office in San Diego, where he spent two years trying narcotics and human trafficking cases before returning to L.A. and taking a job as director of enforcement for the City Ethics Commission in 2012.

During that time, Rahmani said Gov. Jerry Brown had started to vet him for a judgeship, but by then, Rahmani and his wife had two small children and money was tight.

“Frankly, we were broke,” he recalled. “We couldn’t afford to live in L.A. on two government salaries, and my wife said, ‘Well, one of us needs to go back to the private sector,’ and that one of us was me.”

Rahmani said he briefly considered returning to O’Melveny, but he was approached by a former colleague at the firm, Allen Patatanyan, who had struck out on his own years before, and suggested an alternative.

“Allen approached me in 2013 and said, ‘Let’s start a new plaintiffs’ firm,’ and I can honestly tell you my initial reaction was, ‘Absolutely not,’” Rahmani recalled, laughing. “‘I went to Harvard Law School. I’m not going to be that guy on some billboard or bus bench. I worked too hard.’”

But Patatanyan was persistent, according to Rahmani, who said his future partner eventually sold him on the idea of a higher end plaintiffs’ personal injury firm, where the work would have more in common with time Rahmani spent at the U.S. attorney’s office.

“Allen said, ‘You love being a prosecutor. This is the closest thing to being a prosecutor and actually getting paid. … If you go back to big law, you’re going to defend corporations. You’re going to defend criminals, and you’re going to hate it,’” Rahmani explained. “And he was right. One of the reasons I left O’Melveny was because we were hired by the Catholic Church to represent them in the sex abuse cases, and I absolutely hated it. What Allen was selling would allow me to pick and choose my clients.”

In 2014, the duo launched West Coast Trial Lawyers in Los Angeles, and eight years later, the firm is home to 25 attorneys, handling not only a range of personal injury matters but also employment cases.

“We’ll do everything from civil rights and police misconduct to sexual assault, rape cases — obviously motor vehicle, dog bites, premises liability, slip and fall,” Rahmani explained. “And on the employment side, we do both wage and hour and FEHA, so employment discrimination cases on race, gender, medical conditions, sexual harassment and wrongful termination claims. … If it’s a righteous case, we’ll take it.”

Patatanyan and Rahmani approached attorney Ronald L. Zambrano in the spring of 2019 to launch the employment practice at West Coast Trial Lawyers. A longtime employment law specialist, Zambrano was working then for a now defunct firm based in downtown Long Beach, but he said he was definitely looking for a change.

“I needed a new challenge, new direction, new responsibility, and Neama and Allen were like, ‘We’re going to spend lots of money creating an employment practice. Would you like to help us spend it?’” Zambrano recalled. “They just seemed to be very genuine people and very smart people and really earnest in what they were talking about. … And they’ve been so supportive of me ever since.”

Zambrano said West Coast Trial Lawyers has six attorneys in its employment practice — with plans to hire a seventh — and they are now handling well over 200 clients. Zambrano attributed much of that employment practice growth in the last three years to Rahmani’s and Patatanyan’s expertise in digital marketing.

“We do some radio, TV and billboards, but 95% of our marketing budget, time and resources is spent in the digital space,” Rahmani explained, noting there’s a video studio in one of the firm’s LA offices. “It could be anything from Google, Yelp, Bing, and Yahoo paid ads, but we do a lot of SEO in terms of trying to get our sites to rank higher. And we do a lot of social media, too — serious stuff from LinkedIn to more silly stuff. We’re probably one of the biggest firms on TikTok. We do a lot of Facebook. We do a lot of Instagram, YouTube. There’s not one digital or social media platform we don’t invest time and money in.”

Los Angeles defense attorney Michael A. D’Andrea, a partner at Bremer, Whyte, Brown & O’Meara LLP, has opposed West Coast Trial Attorneys on many cases, and he said during each of those matters, the firm practiced with tremendous professional courtesy.

“I think they do a really good job for their clients,” D’Andrea said. “There are a lot of plaintiffs’ firms in Southern California, obviously, but in my mind, you want ethical, responsible, professional attorneys representing you no matter what in any situation. And I think Neama specifically — certainly in my experience with him — is someone who embodies those three things.”

Rahmani said he doesn’t have any regrets about not ultimately becoming a judge, and the longtime trial attorney insisted he doesn’t have plans to change career paths anytime soon, due in large part to the satisfaction he takes from his work.

“You’re really helping people when something bad has happened to them. No one’s calling you with good news. Someone’s been killed, someone’s been injured, someone’s been sexually harassed, someone’s been discriminated against,” he explained. “It’s definitely a lot more fulfilling, and when you put your head on the pillow, you feel good about yourself. … In this world there are lovers and there’s fighters, and I’ve always just been a fighter.”