Don’t forget about businesses that suffer interruption in a disaster 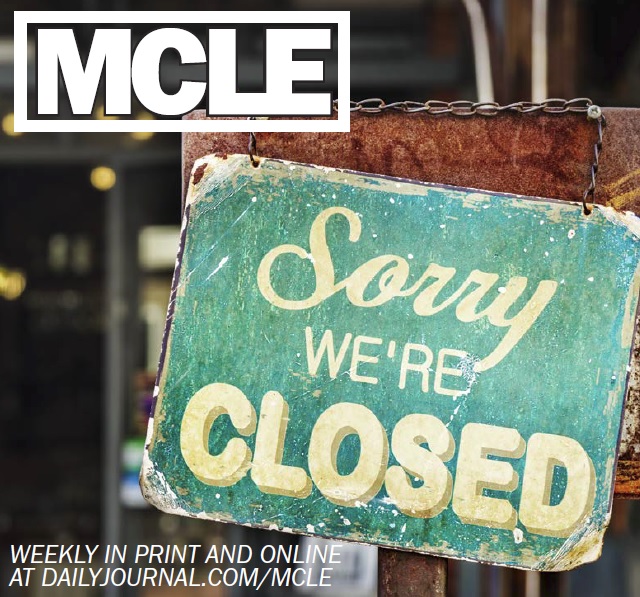 With all the devastation wrought on homeowners in recent weeks by the California wildfires, there has been much attention paid to the benefits and limits of fire insurance for those who need to rebuild their homes. This focus is entirely understandable. However, the financial harm to businesses should not be forgotten. Nor should businesses forget to file claims for business interruption coverage, a benefit available under most every business insurance package.

Business interruption coverage policies were created "to indemnify the insured against losses arising from his inability to continue the normal operation and functions of his business ... consequent upon the destruction of the building, plant, or parts thereof." Pacific Coast Engineering Co. v. St. Paul Fire & Marine Ins. Co., 9 Cal. App. 3d 270, 275 (1970). While this type of insurance is often included within broader commercial property insurance policies, it can also be purchased separately to supplement existing coverage.

Like all insurance packages, different policies provide different amounts of business interruption benefits. Some plans cover a fixed, pre-determined daily dollar amount. Most often, however, business interruption policies cover loss of net income, typically defined as "Net Profit or Loss before income taxes," and continuing normal operating expenses incurred, including payroll. California courts have read these policies to require payment of both net profits and continued operating expenses. See Amerigraphics, Inc. v. Mercury Casualty Co., 182 Cal. App. 4th 1538 (2010) and Mullins v. N.Y. Marine & Gen. Ins. Co., 2017 U.S. Dist. LEXIS 210481 (N.D. Cal. 2017). If a company was operating at a loss, it will not have that amount subtracted from the benefit due for the normal operating expenses. In other words, business interruption coverage is not only accessible to businesses that have net profits.

The insured must show that the business in fact lost profits due to the incident. Pyramid Techs., Inc. v. Hartford Cas. Ins. Co., 752 F.3d 807, 822 (9th Cir. 2014). In the context of manufacturing, proof of lost profits is measured by "(a) the total cost, including depreciation, of manufacturing the merchandise the production of which is prevented during the period of the use and occupancy coverage ... and, (b) the price at which the product would have been sold in that period, either by prior sales agreement or the current market price in the absence of such commitments." General Ins. Co. v. Pathfinder Petroleum Co., 145 F.2d 368, 369 (9th Cir. 1944).

For other industries, different information can be considered in order to determine lost profits during the time of the business interruption. Some examples include performance of an established business in years past, the performance of the insured's similar businesses, and projections of probable profits had the damage not occurred. See American Medical Imaging Corp. v. St. Paul Fire & Marine Ins. Co., 949 F.2d 690, 694 (3rd Cir. 1991).

Business interruption insurance is also available to landlords in the form of rental income coverage. For example, in Ventura Kester, LLC v. Folksamerica Reinsurance Co., 219 Cal. App. 4th 633 (1993), the policyholder purchased a commercial building owner's policy which included coverage for "net loss of rental income." The insurance company denied coverage, however, because a signed lease was not in effect at the time of the covered loss. The Court of Appeal rejected this position, finding that the policy did not specifically require an existing tenant to be in place in order for the policyholder to take advantage of the coverage.

Business interruption policies generally include a maximum time period for which the lost business income will be covered. Coverage is also typically limited to the "period of restoration." This is generally defined as either the time period within which the property has actually been repaired or replaced, or the period in which a reasonable insured should have been able to repair or replace the property. For example, one policy defined "period of restoration" to run through the earlier of: "(1) The date when the property at the described premises should be repaired, rebuilt or replaced with reasonable speed and similar quality; or (2) The date when business is resumed at a new permanent location." Shaw Mortg. Corp. v. Peerless Ins. Co., 615 F.Supp.2d 1172, 1774-75 (S.D.Cal. 2009).

Most of the time, business interruption policies require a complete suspension of operations in order invoke coverage. This has been defined as a "temporary, but complete, cessation of activity." Buxbaum v. Aetna Life & Casualty Co., 103 Cal. App. 4th 434, 444 (2002). In Buxbaum, a law firm experienced water damage from a flood, but the reduction of billable hours during the time of repairs was not covered by the business interruption insurance. This was because the flooding did not require a complete cessation of business. Similarly, when an attorney was unable to try a case after trial exhibits were stolen from his office, he could not recover under his business interruption insurance because the stolen exhibits did not stop him from running his law practice, regardless of the impact on that singular case. Winters v. State Farm Fire & Casualty Co., 73 F.3d 224, 228 (9th Cir. 1995). Additionally, a hotel covered in volcanic ash following the eruption of Mount St. Helens, but which remained open for business, was unable to recover under its business interruption policy because the hotel was still open and had the same number of hotel rooms available for customer use. Keetch v. Mut. of Enumclaw Ins. Co., 66 Wash.App. 208, 210 (Wash. Ct. App. 1992).

However, the exact wording of the coverage is crucial. Some policies cover losses incurred during a partial suspension of activity. See Lewis Food Co. v. Fireman's Fund Ins. Co., 207 Cal. App. 2d 515, 516 (1962) (policy applied where damage occurred "so as to necessitate a total or partial suspension of business").

Finally, as noted above, business interruption coverage applies only where there has been tangible damage to the policyholder's businesses. This can mean obvious physical damage, such as fire damage to a building making it unusable, but it can also include damage to a system whose functionality is essential to the business. For example, an on-premises power outage caused by a hurricane resulting in damage to the company's raw materials has resulted in coverage. Manufacturers Mut. Fire Ins. Co. v. Royal Indem. Co., 501 F.2d 299, 300 (9th Cir. 1974).

In addition to general business interruption coverage, some insurance policies also provide "extra expense" coverage. A typical provision covers expenses incurred to "avoid or minimize the suspension of business and to continue operations at the described premises or at replacement premises or temporary locations including relocation expenses and costs to equip and operate the replacement location or temporary location." This is oftentimes combined with the general business interruption coverage.

Insurance is purchased for difficult times like these. Having paid years of premiums, business owners should not hesitate to seek compensation for their lost income, even if they are unsure as to the exact extent of their coverage.

File That Insurance Claim on Time