Benjamin is a certified specialist in appellate law who co-chairs the Appellate Practice Group at Manatt in the firm's Los Angeles office. 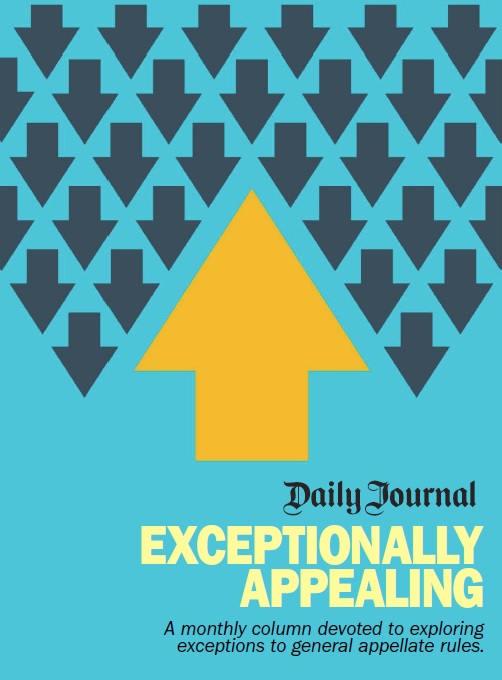 In 1976 singer-songwriter Paul Simon topped the charts enumerating "50 Ways to Leave Your Lover," e.g.: "Slip out the back, Jack. Make a new plan, Stan. No need to be coy, Roy." For appellate lawyers, an emotional trauma more devastating than a bad break-up is the loss of an appeal for some reason other than its merits. Appellate folklore -- borne out by statistical reports -- is that at least 3% of all California appeals are dismissed for procedural reasons. How can this happen? And can we rival one of America's greatest performers in tabulating tragedy? Let's review the ways an appeal can go "Slip Slidin' Away."

Sign it away, Jay. Although losing parties can typically appeal adverse judgments, they are not allowed to do so if they already contractually agreed never to appeal. Appealing after promising not to will result in a dismissal. It shouldn't have been a surprise to the attorneys involved that the appeal was denied in CAS Mgmt., LLC v. Treetop Flyers Collective, 2020 WL 3969754, at *2 (July 14, 2020), where the settlement agreement read: "this judgment shall become final for all purposes upon entry of judgment and [both parties] waive any right to appeal or seek review of this judgment by a higher court." But appellate waivers can also arise from other agreements, such as pretrial agreements (Keating v. LG Elecs. Mobilecomm USA, Inc., 2017 WL 5899224, at *4 (Nov. 30, 2017)) or binding arbitration agreements (Pratt v. Gursey, Schneider & Co., 80 Cal. App. 4th 1105, 1107 (2000)).

So that's one [1]. We'll keep count with numerals in brackets as we hum along. "Hop on the bus, Gus. Drop off the key, Lee."

Appeal the wrong thing, Ming. Not every trial court ruling is appealable. (Code Civ. Proc. Section 904.2.) Many appeals are dismissed because the appeal is not taken from a truly final judgment or appealable order. Discovery orders, or orders sustaining a demurrer or granting a summary judgment motion, for example, are not appealable. S. Pac. Co. v. Oppenheimer, 54 Cal. 2d 784, 786 (1960) (order sustaining objections to interrogatories not appealable; reviewable on appeal from final judgment). [7]

Blow the stack, Jack. Filing a notice of appeal is just step one for perfecting an appeal. Appellate courts require a record to work with (often a large stack of paper). It's the appellant's task to make sure that the record gets to the Court of Appeal and contains everything necessary for the court to make a ruling. Rossiter v. Benoit, 88 Cal. App. 3d 706, 711 (1979) (refusing to consider an issue on appeal when the transcript of the demurrer hearing at issue was not in the record). If an appellant fails to designate a record -- listing documents for a clerk's transcript and/or listing hearing dates for reporter transcripts (see Judicial Council Form APP-003) -- then the appeal can't progress, and will be dismissed. [9]

Don't pay the fee, Lee. Filing a notice of appeal and record designation is pretty easy. But absent a fee waiver, there are also fees that must be paid to perfect the appeal. The fee to appeal is $775, plus a $100 record deposit if a clerk's transcript is used. (Rule 8.100(b)(1)-(2).) And if reporters' transcripts are designated, there are fees for those too. In short, there are a number of fees to pay, and missing any of them may result in a dismissal.

Failing to pay, by the way, can take several forms: Simply not tendering money is one, of course. But a bounced check is another; and failing to pay after a fee waiver is denied is, arguably, a third. (Rule 8.100(c)(1).) Dismissal for failure to pay is expressly authorized by Rules 8.100(c)(2) and (3). Similarly, dismissal is expressly authorized for a failure to pay the required record deposit. (Rule 8.100(d)(3).) [We'll count failing to pay the filing fee and the record fees as two different ways to ax an appeal, 10-11.]

Fail to procure, Arthur. The appellant also bears ultimate responsibility for ensuring the record, once designated and paid for, is actually procured. If the appellant fails to ensure the record actually reaches the Court of Appeal, the appeal may be dismissed. (Rule 8.140(a)(1) & (b)(1); see McGinnis v. Monjoy, 169 Cal. App. 2d 519, 523 (1959) (dismissing appeal after seven months had passed, yet appellant had not paid for the reporter's transcript, and the requested transcript did not include key documents).) [12]

Forget the form, Norm. Once an appellant has pushed all the necessary paper in the trial court, the fun continues at the Court of Appeal. An appellant must file a Civil Case Information Statement (Judicial Council Form APP-004). Failure to do so empowers the court to dismiss the appeal, as does failure to complete the form correctly. (Rule 8.100(g)(2); Tang v. JPMorgan Chase Bank, 2020 WL 7239542 (Dec. 9, 2020).) In some courts, there are mandatory settlement conference statement papers as well, and failing to file them -- as well as a failure to show up for any mandatory settlement conferences -- may result in a dismissal. [13-14]

Another mandatory form, the Certificate of Interested Entities or Persons [Judicial Council Form APP-008], must be filed with an appellant's initial substantive filing (e.g., a motion or brief). Refusal to provide this form, which exists to allow appellate justices to consider conflicts for recusal purposes, may result in a dismissal. (Rule 8.208(d)(3).) [15]

Drop the ball, Paul. At this point in the process (and later), it's possible that the parties might settle. If that happens, the appellant may not care whether the appeal is dismissed. Even so, the rules require filing a notice of settlement (Rule 8.244(a)(1); see 2d District Form 2DCA-14). Failing to file such a notice (and otherwise not telling the court about the settlement or mentioning it at oral argument) is a way to get an appeal dismissed and maybe incur sanctions. Huschke v. Slater, 168 Cal. App. 4th 1153, 1163 (2008). [16]

Don't follow through, Stu. Similarly, if the appellant does file a notice of settlement, but then fails to voluntarily abandon or dismiss the appeal within the usual 45 days (or time extended for good cause), then the court may dismiss the appeal. (Rule 8.244(a)(3)-(4).) [17]

Don't do the brief, Chief. After an appellant perfects the appeal, the real work begins. But if an appellant fails to file an opening brief, then the appeal will be dismissed. (Rule 8.220(a)(1).) Even worse, if the respondent fails to file a brief, the court has the discretion to treat that as "an acknowledgment that the appeal is well taken and reverse the trial court's orders" or to accept the statement of facts in the appellant's brief as true. In re Marriage Grady and Britten, 2009 WL 373681, at *4 (Feb. 17, 2008). (Rule 8.220(a)(2).) [18]

Ignore the rules, Jules. Now we hit the jackpot. There are so many ways to violate the rules of court in preparing a defective appendix (or inadequate exhibits for an appellate writ petition) and so many ways to prepare a defective brief, that the counting could easily surpass Simon's "50 Ways." Usually, such dismissals occur only when a brief violates so many rules that the Court of Appeal simply cannot contain its ire or take the appeal seriously. [We'll count this as just one big one, taking us up to 19.]

Act like a jerk, Dirk. We take it for granted that a losing party gets at least one appeal as a matter of right. But when a party's behavior has been so outrageous that it goes beyond even the normal range of "bad" legal behavior -- if a party has been egregiously obstructive, disobedient, willful or vindictive -- the appellate court can invoke the civil disentitlement doctrine to dismiss the appeal. Disentitlement is very rare, but the doctrine serves as a reminder to stop playing games, James. MacPherson v. MacPherson, 13 Cal. 2d 271, 277 (1939)

("A party to an action cannot, with right or reason, ask the aid and assistance of a court in hearing his demands while he stands in an attitude of contempt to legal orders and processes of the courts of this state."). [20]

Having hit 21 instead of 50 may feel like a let-down. But the title of Simon's ditty is belied by a careful parsing of its lyrics: Rather than 50, the song really proposes only five. Through exceptional effort, we've beaten that figure by a factor of four (plus one for good measure), and so declare success. 